More than 100 of the nation’s most highly-skilled aerobatic pilots will contend in head-to-head competition for the U.S. National Aerobatic Championship title at the Grayson County Airport in Denison, TX, this month. The Championships will be held September 25-30 in Denison, which is one hour north of the Dallas metro area, and are organized by the International Aerobatic Club (IAC), the governing body for aerobatics in the United States.

The 2005 National Championships highlight the selection of the U.S. Advanced Team members who will compete against top pilots from over 20...

Regional series competitors can find the latest standings in their region on the IAC Members only website at http://members.iac.org. Choose Regional Series under Contest Results. Having completed the required number of contests and in the lead as of today’s date are:

This year’s AirVenture should prove to be an exciting one with the appearance of SpaceShip One/White Knight - the world’s first civilian manned spacecraft to fly beyond the earth’s atmosphere; as well as, the Virgin Atlantic Global Flyer that Steve Fossett successfully piloted on the first nonstop, non-refueled, around-the-world flight. Of course, there will be aircraft displays, vendors and educational opportunities galore and IAC is adding to the wealth of activities available to AirVenture attendees by hosting its own aerobatic workshops, forums and member...

IAC Board of Directors Slate of Candidates Announced

Official voting ballots for the IAC Board of Director election have been mailed to all current members and must be received by IAC headquarters no later than July 26, 2005 to be counted.

Marta Meyer has been named the team manager. Marta has been with NASA for more than 27 years and is the...

END_OF_DOCUMENT_TOKEN_TO_BE_REPLACED 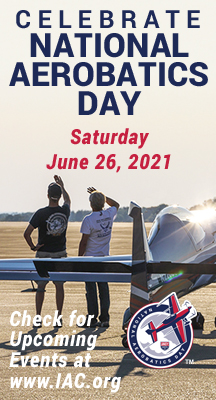