Trophies to be Retired at IAC Member Reception Thursday

The International Aerobatic Club will retire its championship trophies at the annual member reception July 28, Saturday, evening at the IAC Aerobatic Center on the EAA convention grounds. The buffet starts at  6:00 p.m. - 8:00 p.m.

Since the IAC championships were discontinued this past year, the IAC Championship (Fond du Lac) trophies will be formally retired and recognition will be given to all past trophy winners.

The trophies that will be retired...

If you didn't run right out and get your Unlimited Smooth Patch when the new IAC Rule Book was published --- too late! Appendix 5 of the 2001 Rule Book shows only three figures required for the Unlimited Achievement Award.  Sorry folks, not going to happen! When the new book was printed, the glider figures were accidentally printed over the top of the remaining list of Unlimited Power figures. If you have any intention of trying for the Unlimited patch this year or are a judge who might be asked to watch the patch attempt, be sure and add the following figures...

A new rule for 2001 [2.6.3(e)] requires all National judges to attend a judge's recurrency or Advanced Judging Criteria seminar at least once every three (3) calendar years, or revert back to a Regional judge status until such time as this requirement is met.  The question arises as to when does the clock start for National judges whose last school was prior to this year? The policy is as follows:

The 2001 IAC Annual Meeting was held in Indianapolis, IN as part of the National Aeronautic Association Air Sports Expo on February 9th. The IAC elected Rob Dorsey and Dave Monroe as President and Vice President respectively. Four directors vied for three Director seats on the IAC Board. Jim Taylor beat out incumbent Howie Stock as Director for the Southeast U.S. region. Here are the official election results:

END_OF_DOCUMENT_TOKEN_TO_BE_REPLACED 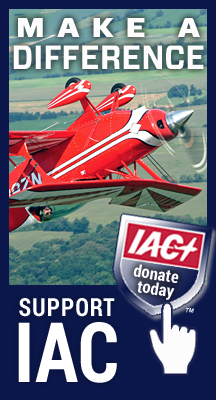