Seventyeight of the the nation's best aerobatic pilots came together during the week of September 22-28 at the U.S. National Aerobatic Championships held in Oshkosh, Wisconsin to compete for national championship titles. Offical pre-contest practice began on Friday, September 21 and the first day of competition flights began on Saturday, September 22.

The Opening Ceremony on Saturday morning was held in the Founder's Wing at the EAA Aviation Museum, a beautiful and memorable location. Contest Director, John Smutny kicked off the event with a welcome to all participants and served as the Master of Ceremonies. The Mayor of Oshkosh, Steve Cummings greeted everyone to Oshkosh and expressed his pleasure that the event had returned to Oshkosh once again. Rick Larsen, EAA Vice President of Community & Member Programs, was delighted to welcome back the U.S. Nationals as a natural fit, as part of the EAA family, to hold its premier event in Oshkosh. 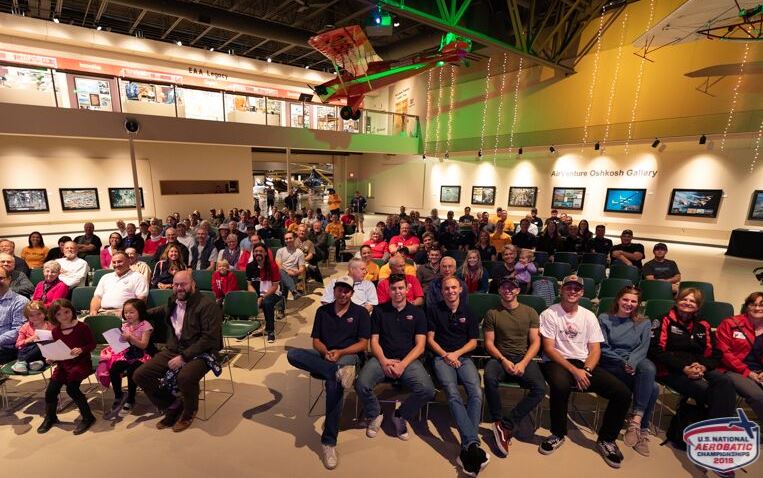 The U.S. Air Force Academy cadets did the Posting of the Colors in their dress blues followed by the Innvocation lead by Bryan (Hollywood) Hayden. Hollywood's wife, Kristina sang the National Anthem beautifully. A "Gone West" slide show, created by Gary DeBaun was shown in rememberance of our aerobatic friends who have passed on over the last year. IAC President, Robert Armstrong declared the U.S. National Aerobatic Championships "Open".

The schedule for the contest week saw the Unlimited pilots flying on Saturday and Sunday followed by Monday's Intermediate, Advanced and Primary/Sportsman categories Knowns flights. Mother nature turned on us on Tuesday and flying had to be cancelled. Wednesday things picked back up continuing first with the Primary/Sportsman pilots that were unable to finish their Known flights on Monday. They continued and completed their second flight. Although Intermediate and Advanced were scheduled to fly their second sequence, the wind proved to be too strong in the afternoon. Thursday the Unlimited pilots flew their third flight and Intermediate and Advanced completed their second flights. Friday's final day of flying concluded with the Intermediate, Advanced and 4 minute free program.

The Closing ceremony took place on Friday at the Founder's Wing. The Emcee was long time airshow announcer, Danny Clisham. Trophies were presented by the chief judge in each category, with the exception of the new Giles Henderson Trophy which was presented by Giles' widow Lyn and their son Garth. The Henderson family commented that they were very honored to be invited to the trophy presentation, the master trophy was amazing and everyone they met made them very welcome and they were treated as part of the aerobatic family that is IAC.

An excellent Key Note address was given by CIVA president, Nick Buckenham. Nick traveled from England at the invitation of Mike Heuer, who is the IAC's CIVA Delegate. While at nationals, Nick served as the Advanced category chief judge and assisted the scoring director prior to the contest with some training on the ACRO scoring program. 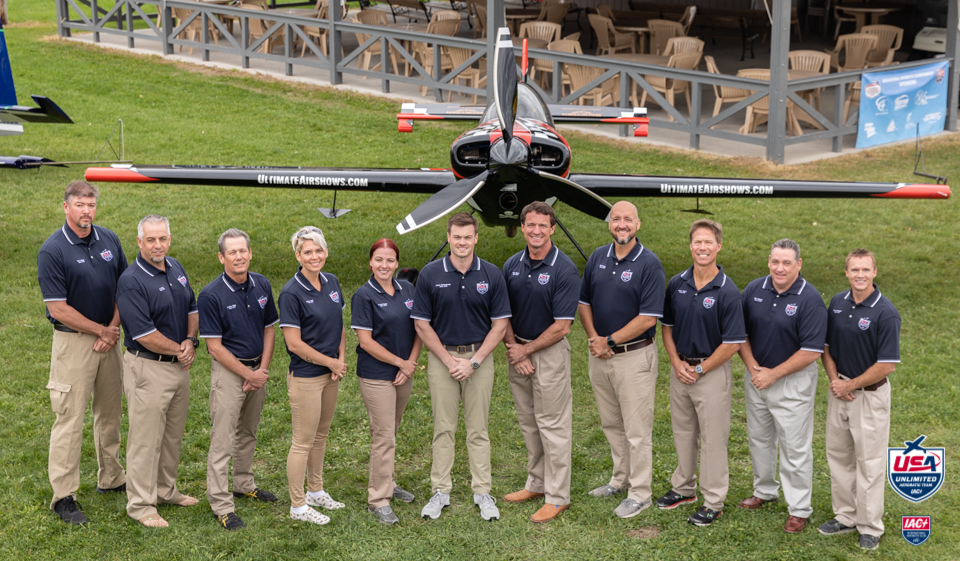 Finally, the evening ended on a high note with the annual auction raising $3300 to support the next national championships and $3500 in support of the Unlimited Aerobatic Team.

Photos from the contest and social events can be found online at: https://www.iac.org/gallery/2018-us-national-aerobatic-championships

All the contest results can be found online at: https://www.iac.org/files/nationals-results/2018/ 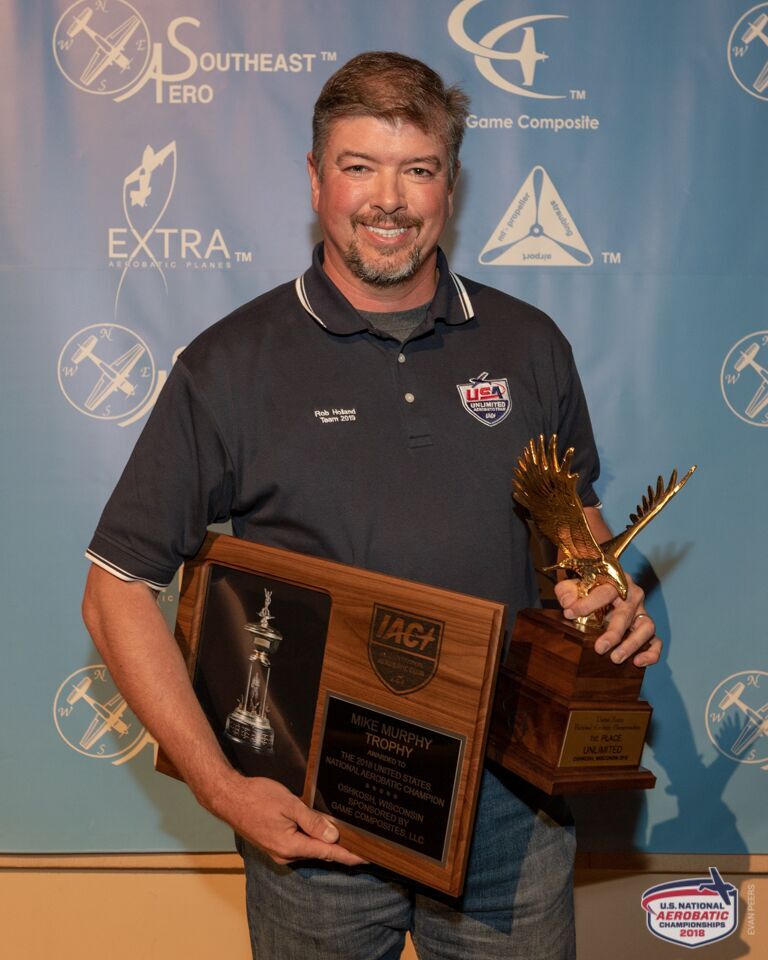 The top placing Unlimited competitor's name is engraved on the Mike Murphy Cup. 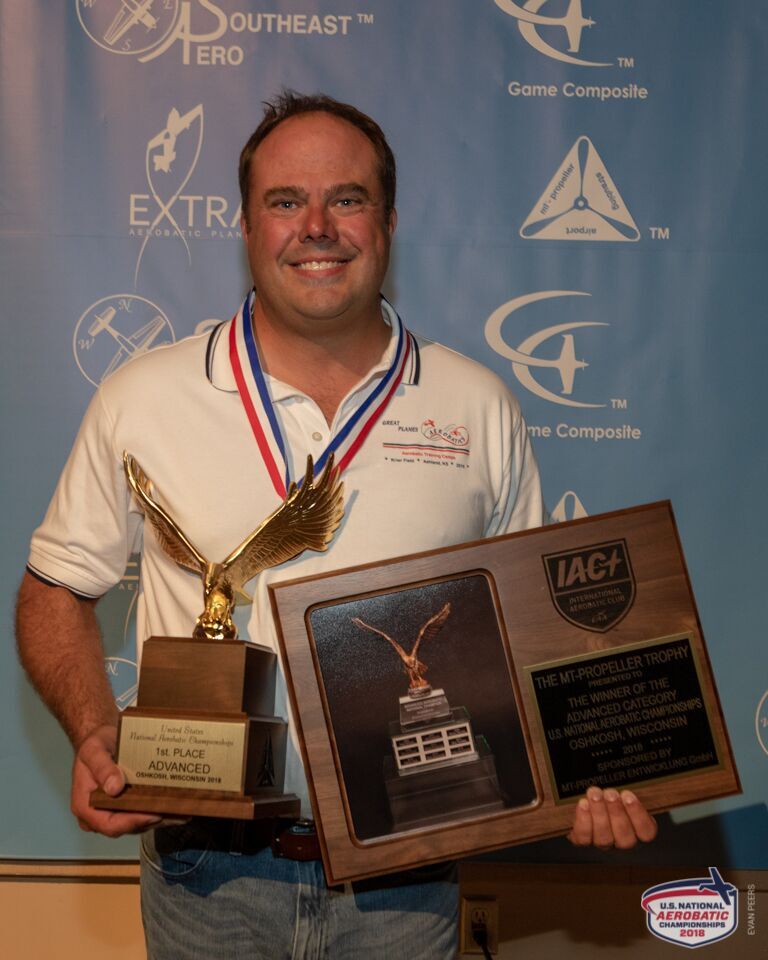 Congratulations to John Ostmeyer, who wins his first Nationals Advanced Championship. John flies a beautiful Pitts S1-T, which he just finished his new wings in June, after almost 4 years of hard labor, prior to a summer schedule full of making the rounds to chapter contests. John flew in the 2018 Lone Star and Doug Yost Challenge aerobatic contests prior to coming to Nationals. He finished in first place at Lone Star and in third place at Doug Yost. This is John's 6th time at Nationals since 2012.

The top placing Advanced competitor's name is engraved on the MT Propeller Trophy. 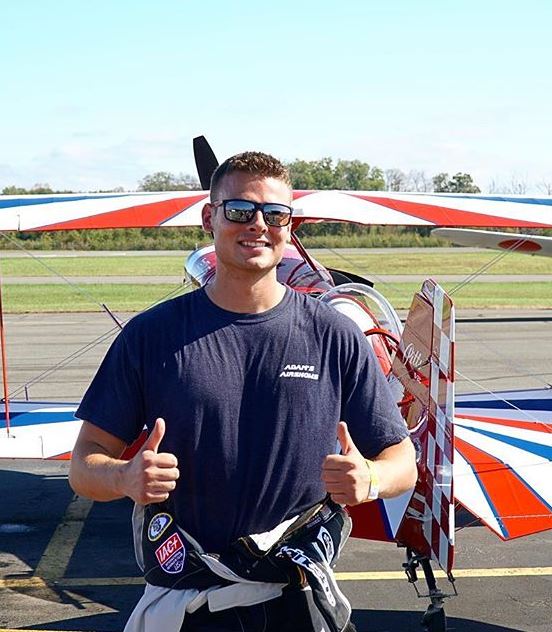 Congratulations to Adam Messenheimer, flying his Pitts S-2C with patriotically painted wings and checker board tail. Adam started flying in competition in 2016 in the Sportsman category where he placed 3rd at the East Coast aerobatic contest that year. In 2017 he flew 5 contests, including U.S. Nationals where he placed 5th and brought home a first place trophy at the East Coast aerobatic contest. This year he flew 5 contests including nationals.This is first time win in Intermediate at Nationals.

The top placing Intermediate competitor's name is engraved on the Fred Leidig Trophy. 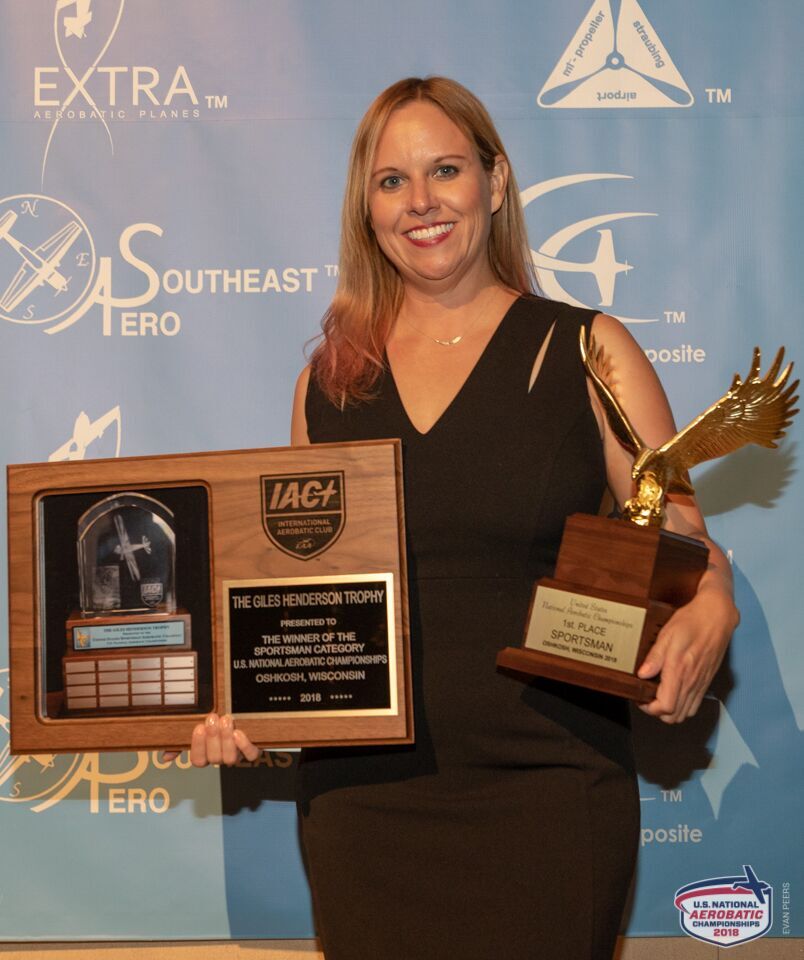 Congratulations to Susan Bell on her first place win in the Sportsman category and the first time recipient of the new Giles Henderson Trophy.

Susan has primarily been flying in the Southwest region with a couple of contests in the Northwest region since 2016.

Susan began her contest life in a Bellanca 8KCAB and flew it in the 2016 contest season until she changed her mount to a Extra 300. In 2017 she flew two contests and in 2018 she has flown six including Nationals. This was her first time at nationals. 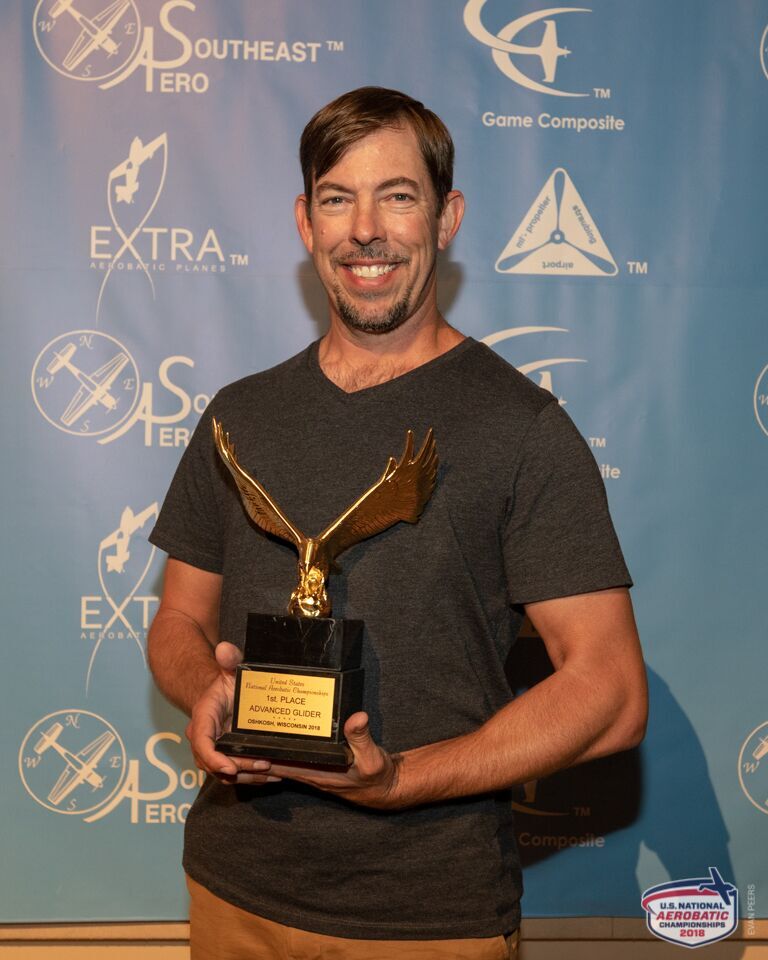 Congratulations to Jason Stephens on his first place win in  the Advanced Glider category. Jason is the Chairman of the IAC's Glider Committee and has been competing at Nationals since 2006. He was the past Unlimited Glider champion in 2006, 2007, 2008, 2012 and 2013.

Jason's glider instructor through his high school years was Les Horvath, a Hungarian immigrant who was a former member of the U.S. Glider Aerobatic Team and a pioneer in glider aerobatics in the United States. In 1969, Horvath founded Arizona Soaring, a school Stephens’ family purchased in 1987 and operates today. 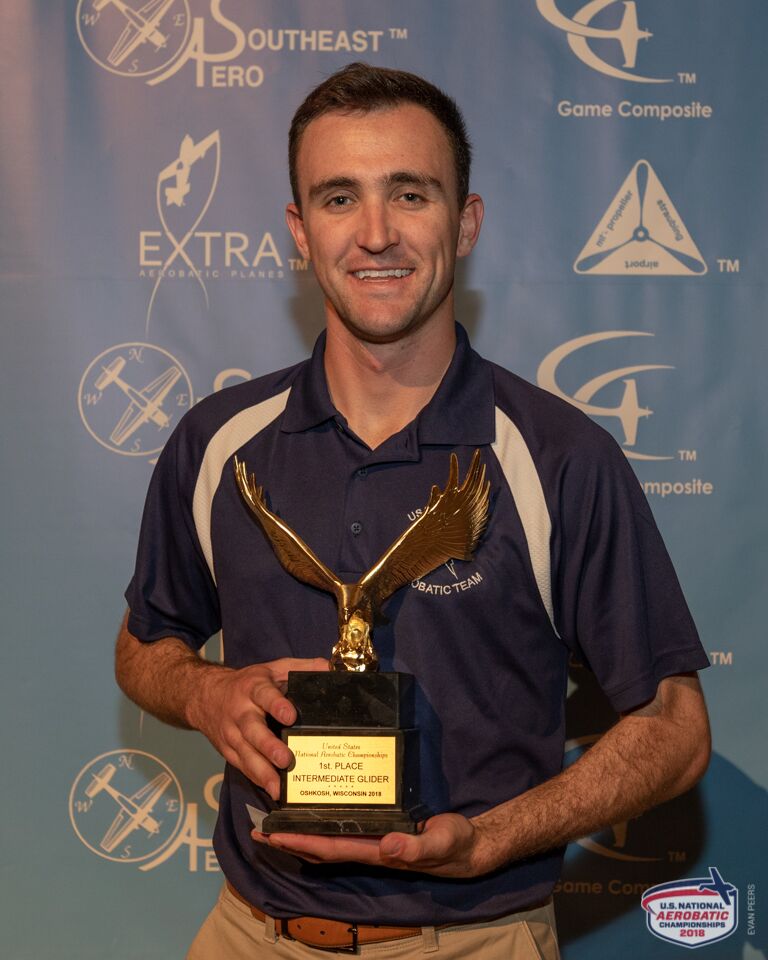 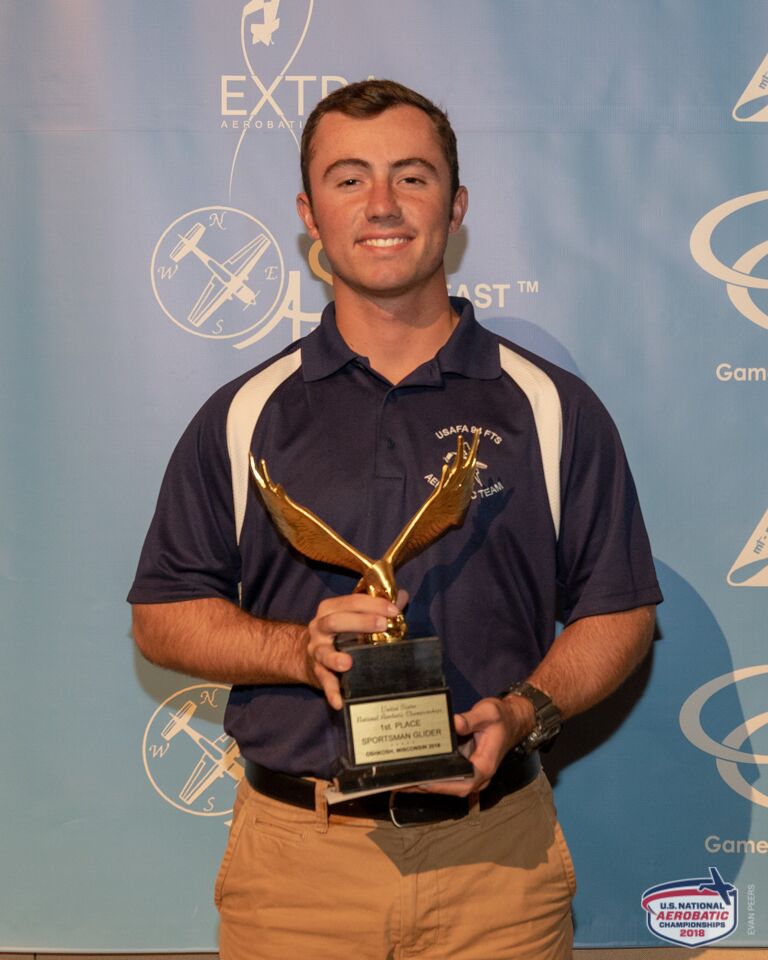 Congratulations to Michael Hayes Cloninger on his first place win in the Sportsman Glider category. Mike is also a part of the U.S. Air Force Academy aerobatic team flying the academy's shared DG Flugzeugbau DG-1001. This is his first contest and first attendance at nationals. He followed up this win with a 2nd place finish at the Clyde Cable Rocky Mountain aerobatic contest October 6-7.