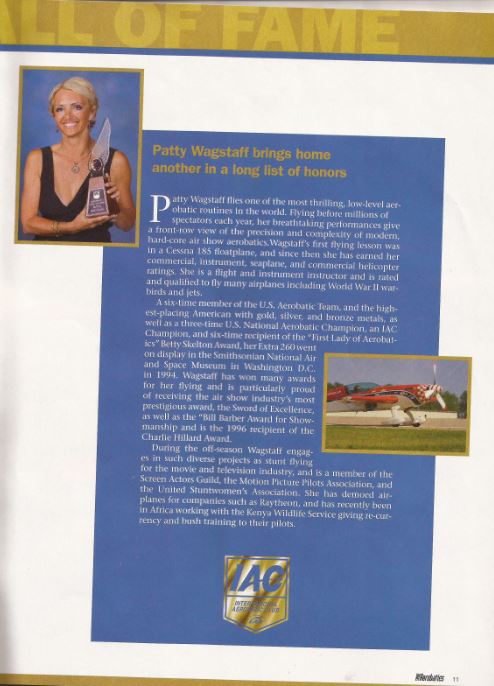 Patty Wagstaff brings home another in a long list of honors

Patty Wagstaff flies one of the most thrilling, low-level aerobatics routines in the world. Flying before millions of spectators each year, her  breathtaking performances give a front-row view of the precision and complexity of modern, hard-core air show aerobatics. Wagstaff's first flying lesson was in a Cessna 185 floatplane, and since then she has earned her commercial, instrument, seaplane, and commerical helicopter ratings. She is a flight and instrument instructor and is rate and qualified to fly many airplanes including World War II warbirds and jets.

A six-time member of the U.S. Aerobatic Teamn and the highest-placing American with gold, silver, and bronze medals, as well as a three-time U.S. National Aerobatic Champion, an IAC Champion, and six-time recipient of the "First Lady of Aerobatics" Betty Skelton Award, her Extra 260 went on display in the Smithsonian National Air and Space Museum in Washington D.C. in 1994. Wagstaff has won many awards for her flying and is particularly proud of receiving the air show industry's most prestigious award, the Sword of Excellence, as well as the "Bill Barber Award for Showmanship" and is the 1996 recipient of the Charlie Hillard Award.

During the off-season Wagstaff engages in such diverse projects as stunt flying for the movie and television industry, and is a member of the Screen Actors Guild, the Motion Picture Pilots Association, and the United Stunwomen's Association. She has demo'd airplanes for companies such as Raytheon, and has recently been in Africa working with the Kenya Wildlife Service giving re-currency and bush training to their pilots.