AT A GLANCE: Southeast regional series standings after one contest  - Snowbird Classic

This spring Sebring contest last took place in 2019. Returning to reclaim his first place status will be Kyle Collins in his Pitts S1T in Intermediate. Kyle had a very decisive victory scoring 81.33% over second and third place finishers at 74.54% and 73.44%. Jerry Esquenazi, who just placed first at the Snowbird Classic in the Intermediate caetogry the last weekend in March, will have his work cut out for him. 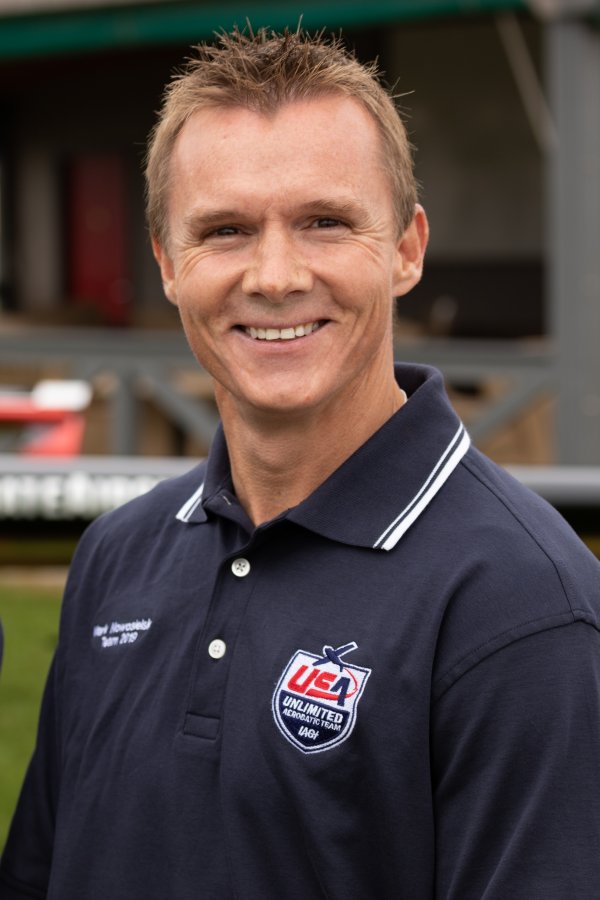 Congratulations to the organizers and all the competitors on a safe, fun and successful contest!  FINAL SCORES: https://iaccdb.iac.org/contests/693. More photos are being uploaded to the IAC 89 chapter archive gallery.

" Finally, after over a year of forced hibernation the COVID clouds parted and the first IAC aerobatic of 2021, the Snowbird Classic Aerobatic Contest and IAC Open Championship East was on!," said Assistant CD Hector Ramirez. " The contest was held at X60, Willison, Florida March 25-27. However, the event was bittersweet with the tragic passing of our Contest Director, Mark Nowosielski in 2020. (pictured right)

"Mark laid the groundwork for the contest's move from Dunnellon and is credited for much of the legwork required for the 2020 Snowbird Classic, which was delayed. The 2021 contest was dedicated to Mark's memory and that of our contest's co-founder, Chuck Cohen who left us in 2017.

"Volunteers are an essential part of every IAC contest and we were lucky to get a great mix of judges, recorders and other volunteers from the local community and from as far away as Louisiana, Texas, North Carolina, Alabama, Georgia and more distant reaches of Florida."

Below are a few that helped made it all happen (Left to right), Laurie Ramirez acting as Volunteer Coordinator with CD Kevin Campbell, Starter Ralph Sebexen in his vintage golf cart,  Philip & Elizebeath Bellew from Alabama. 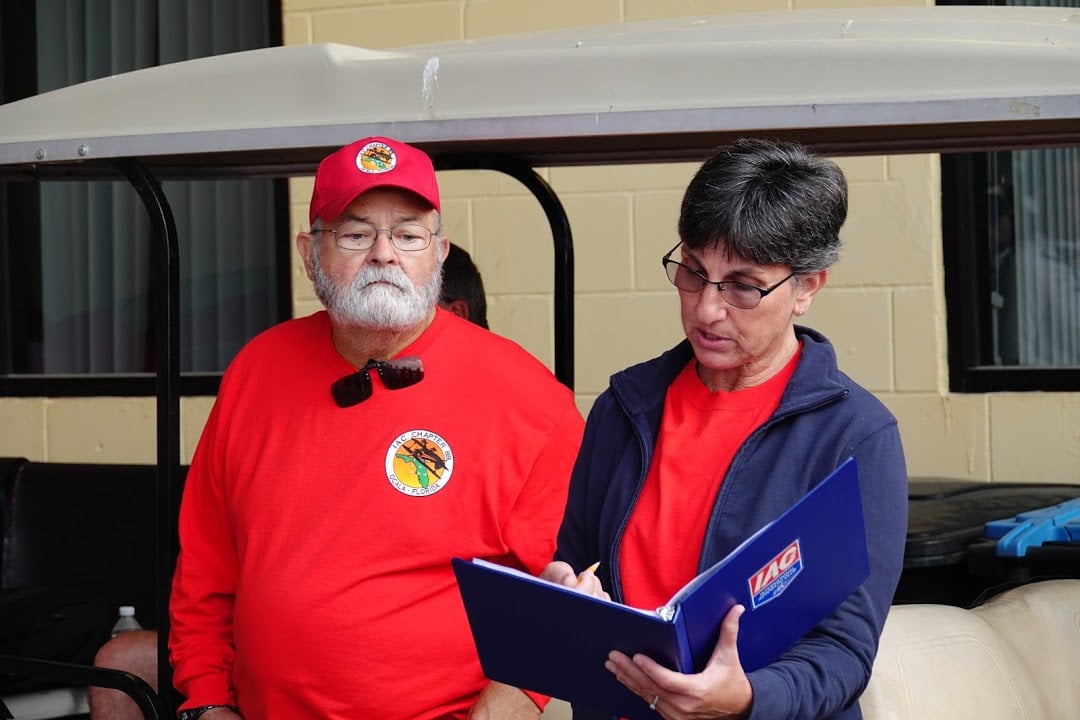 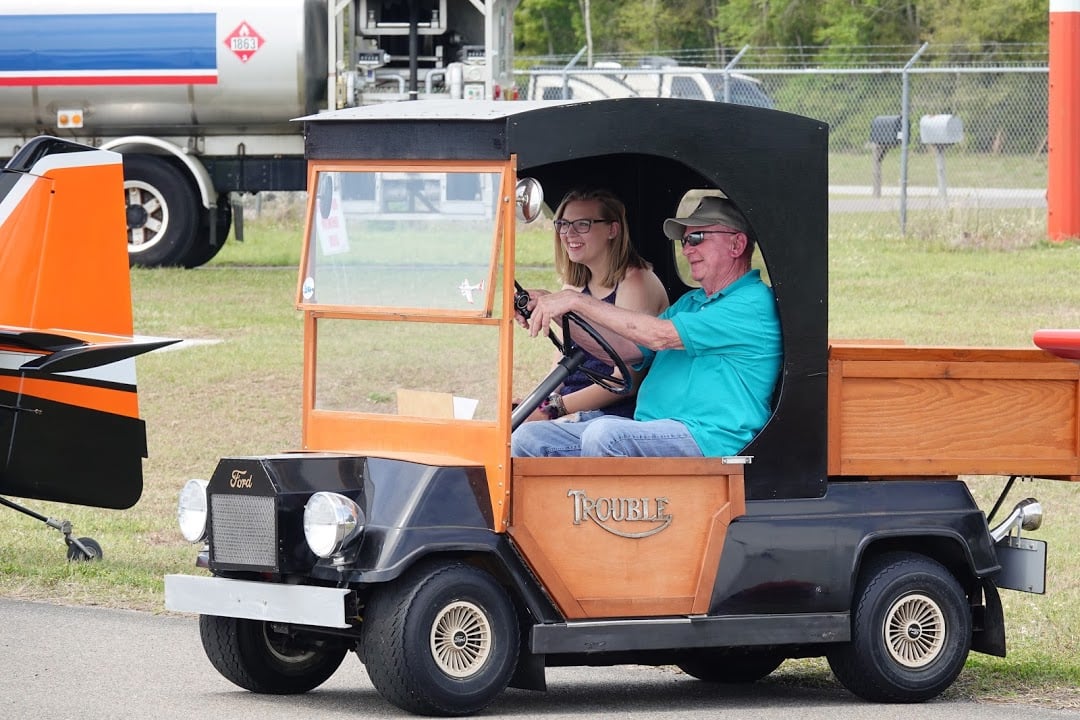 Some photos from the Judge's Line (left ot Right); Bill and Laura Barnard from Lousiana with recorder Vanessa Greene, Faith Drewry, Mark Stewart and Michael Hare judging the Advanced Category, and finally Jay Hunt, Hector Ramirez and recorder Bob out on the line to judge Intermediate. 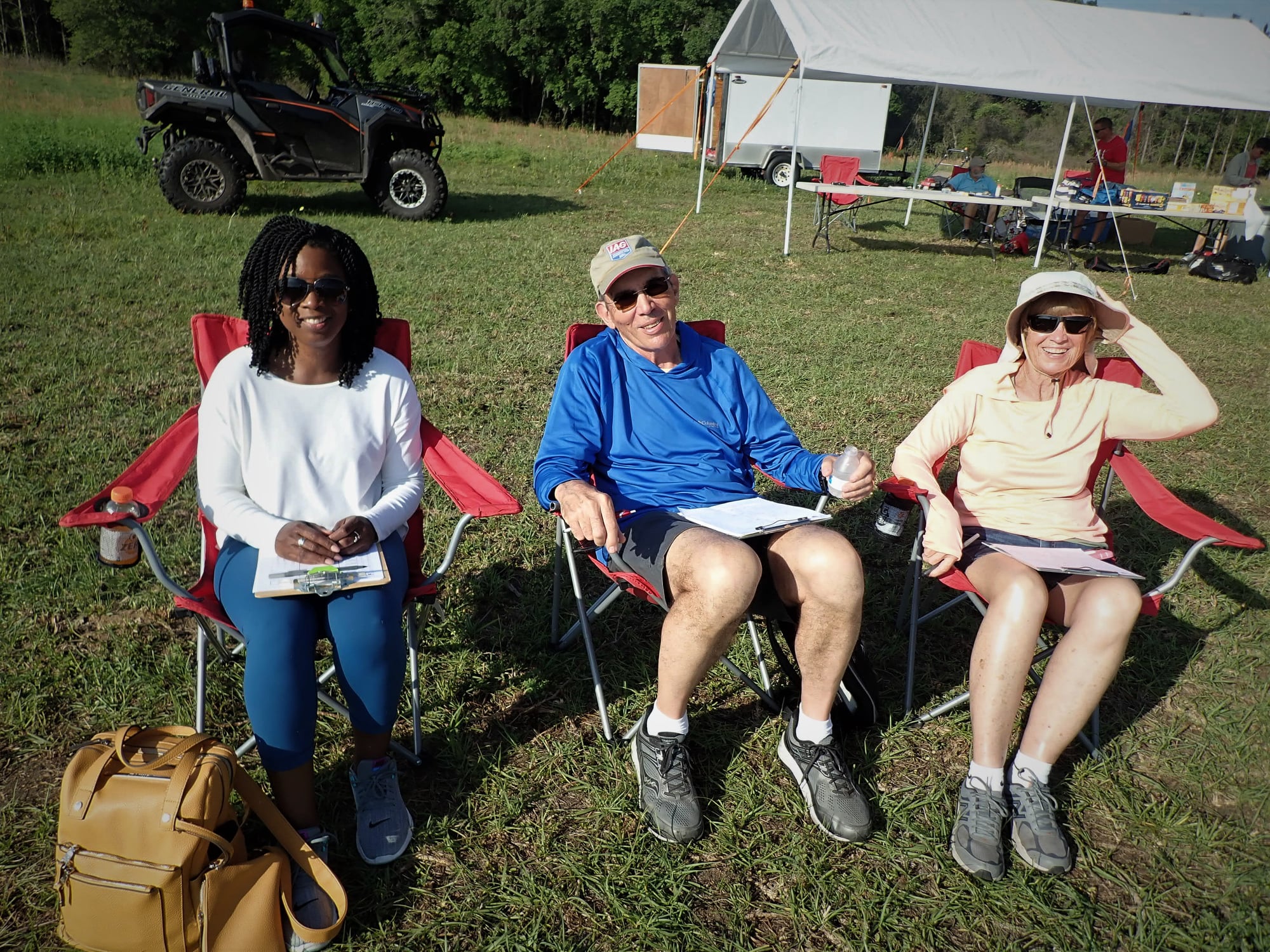 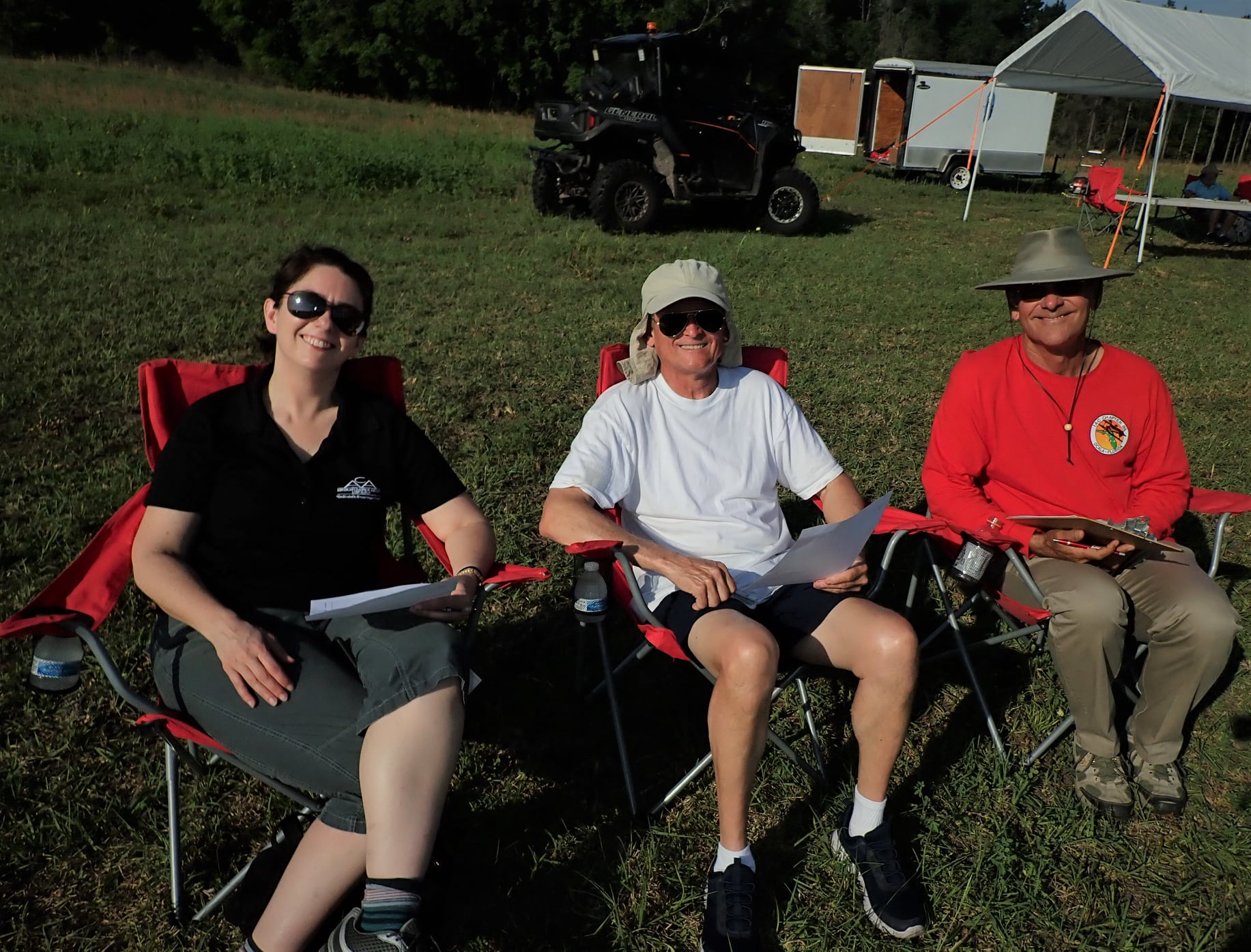 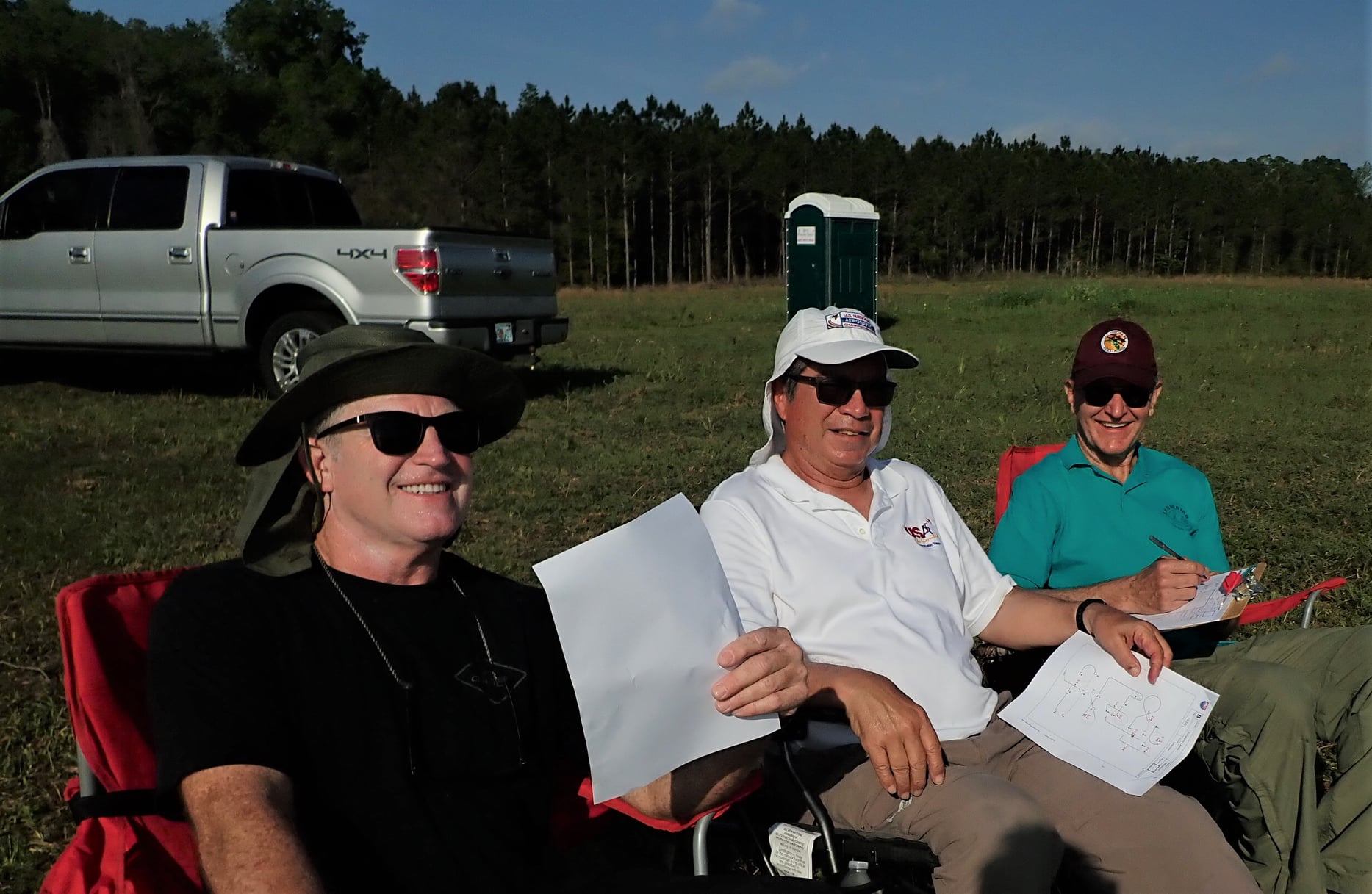 Elizabeth Birch flying an Xtreme Decathlon, took first place in the final Sportsman flight (Unknown) followed by Juliana Frachhetti in an Extra 300 and Martin Hill flhying A Pitts S-1S.  In the Intermediate Unknown first place went to Jerry with Tom and Corey close behind. 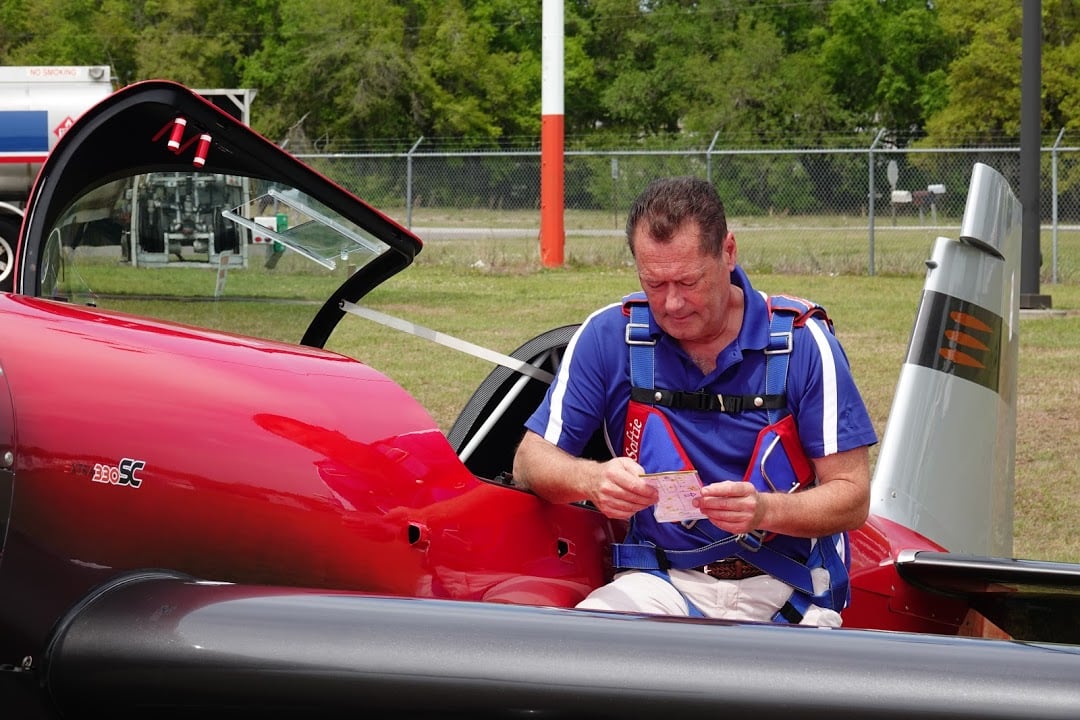 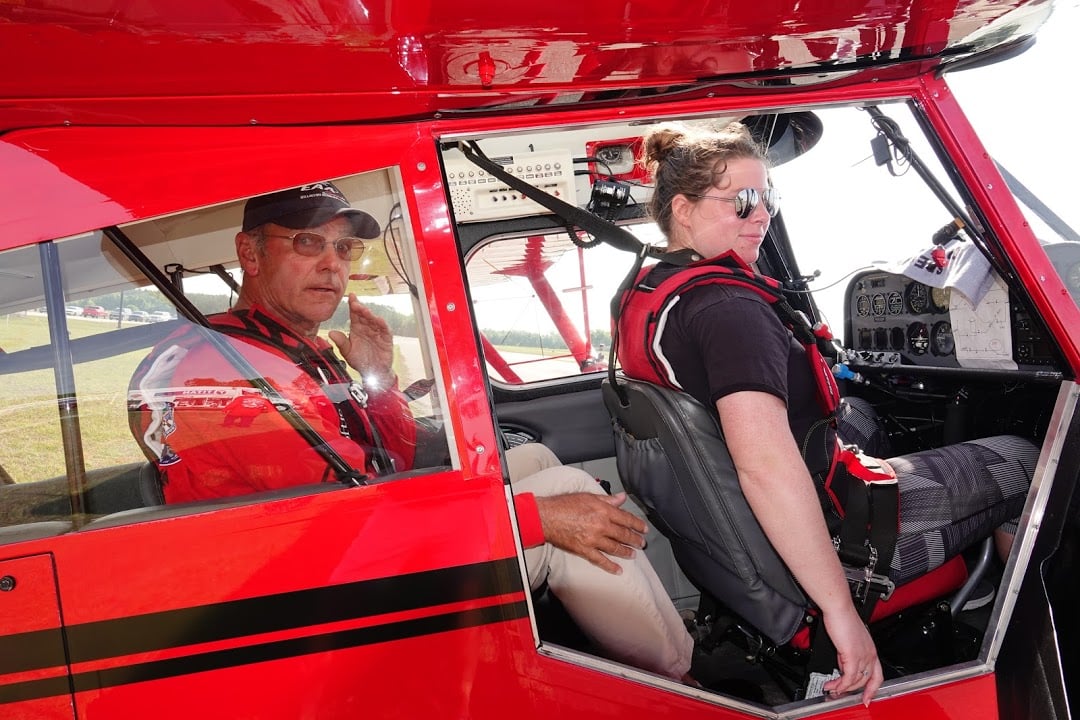 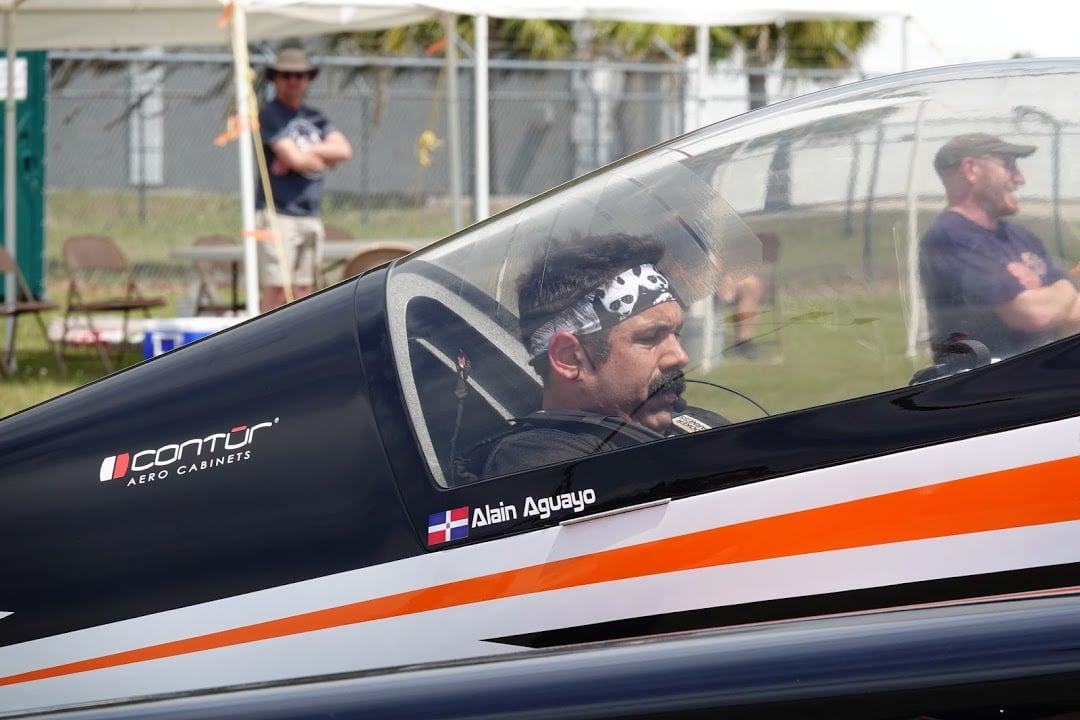 Sportsman and Primary faced strong headwinds on the first flight . At the end of two Sportsman flights Elizabeth Birch trailed Juliana Fraschetti with Marty Hill was in third place.  The three primary pilots finished the Known with Mike Lopez in first, Tomas Epperson in second and Mel WIlliams in third. The Free sequence found Mike in first, Thomas in second and Mel remained in third place.

Primary competitors: (below left to right) Mike Lopez with his Vans RV-4, Thomas Epperson with an American Champion 8KCAB and Mel Williams with his Bellanca Super Decathlon. 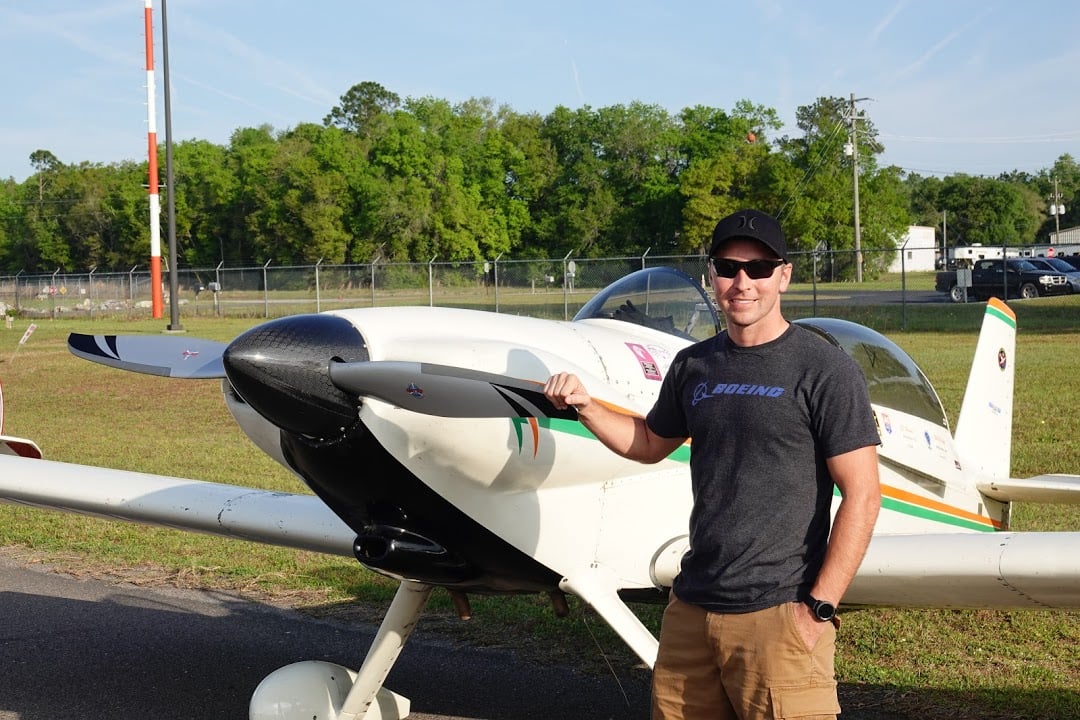 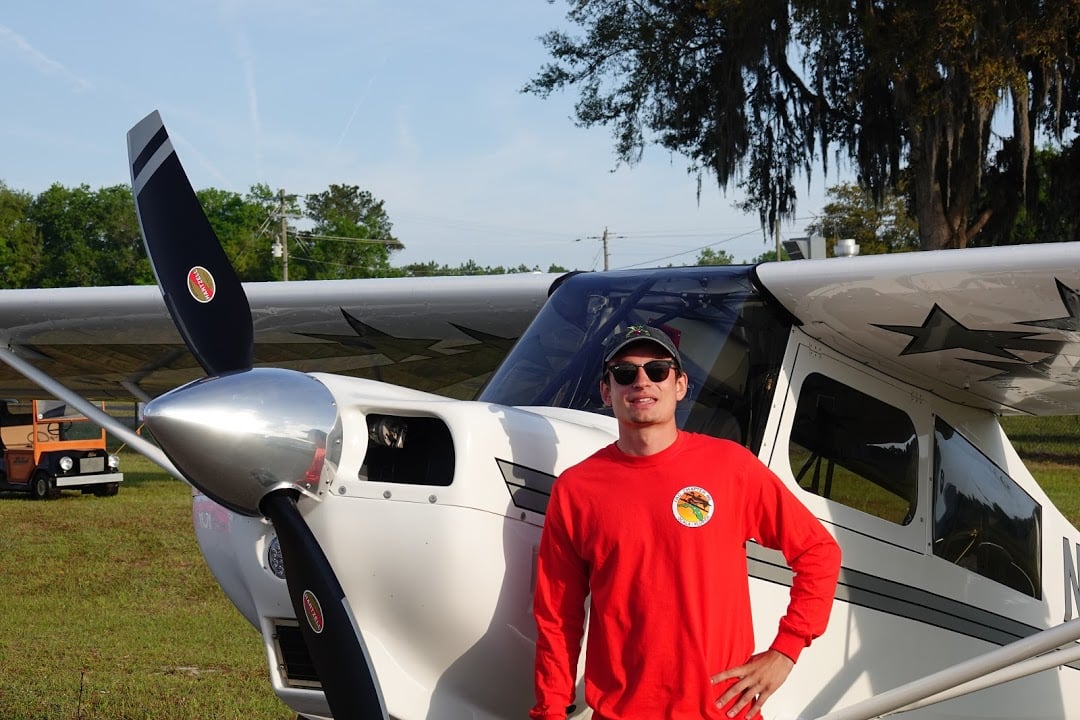 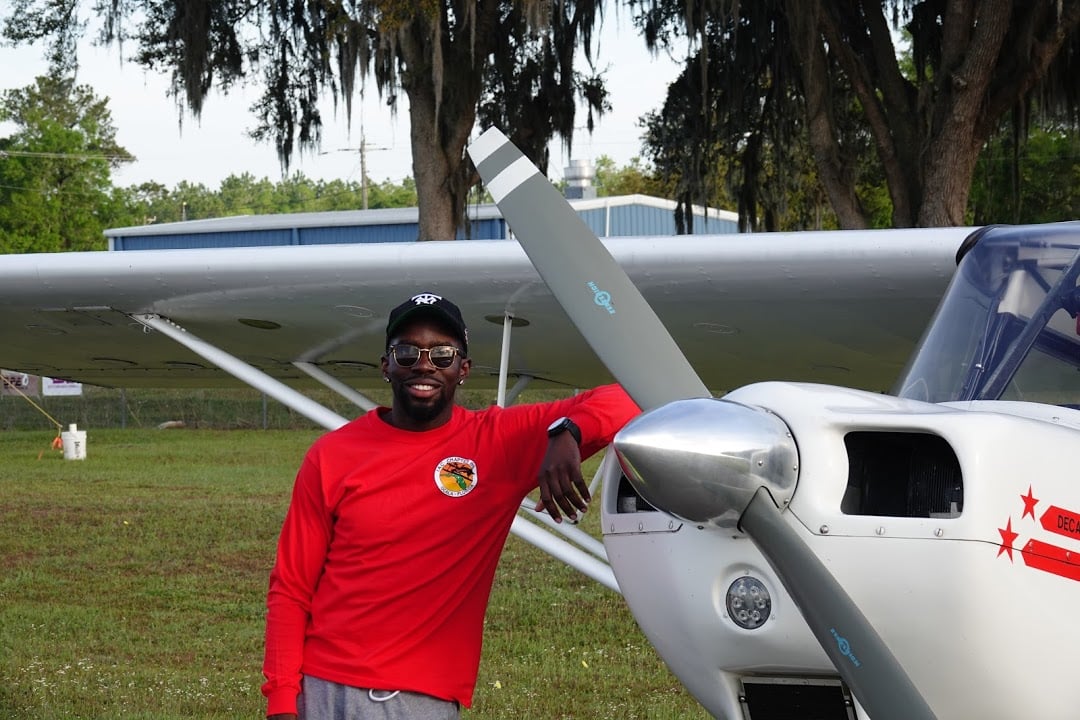 Intermediate Known went to Jerry Esquenazi in his Extra 300S with Jay Hanson second flying the MX2 prototype, and Corey Gerulis third in an Extra 330SC. The Free saw Tom Thomas in a Giles 202 take first and Corey Gerulis moving up with a second place  and Jerry Esquenazi in third. The Advanced free was flown with a first place win by Kyle Collins Piloting his Pitts S1T. Marty scored second place in his MX2 and Chris Magon followed in third flying an Extra 330SC. 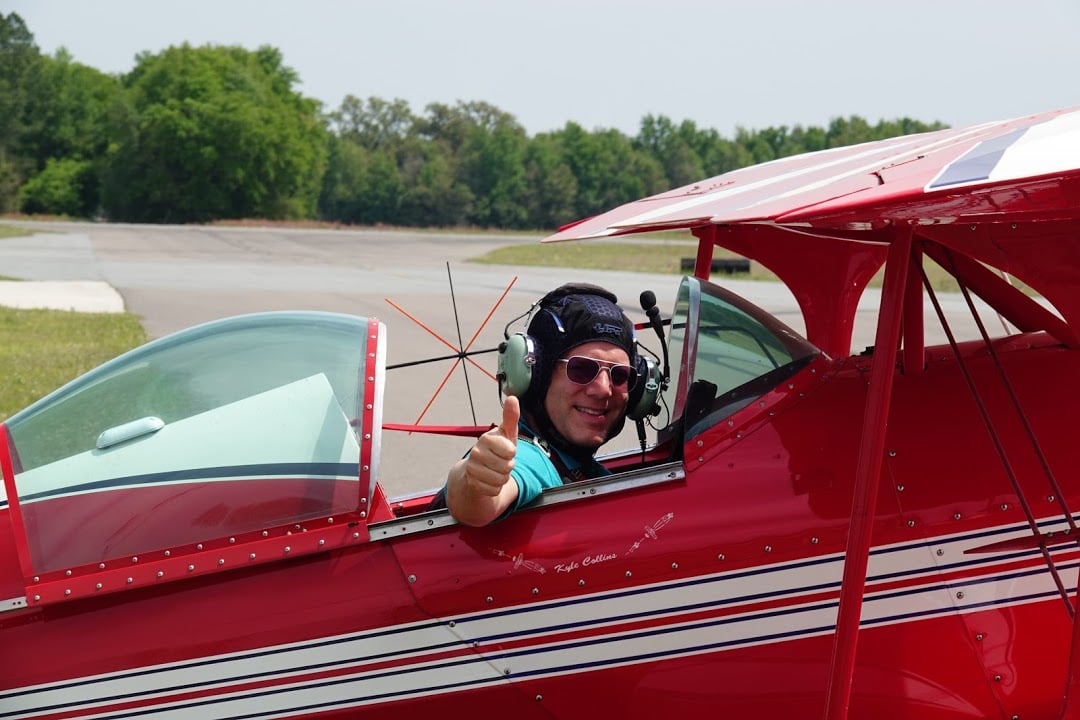 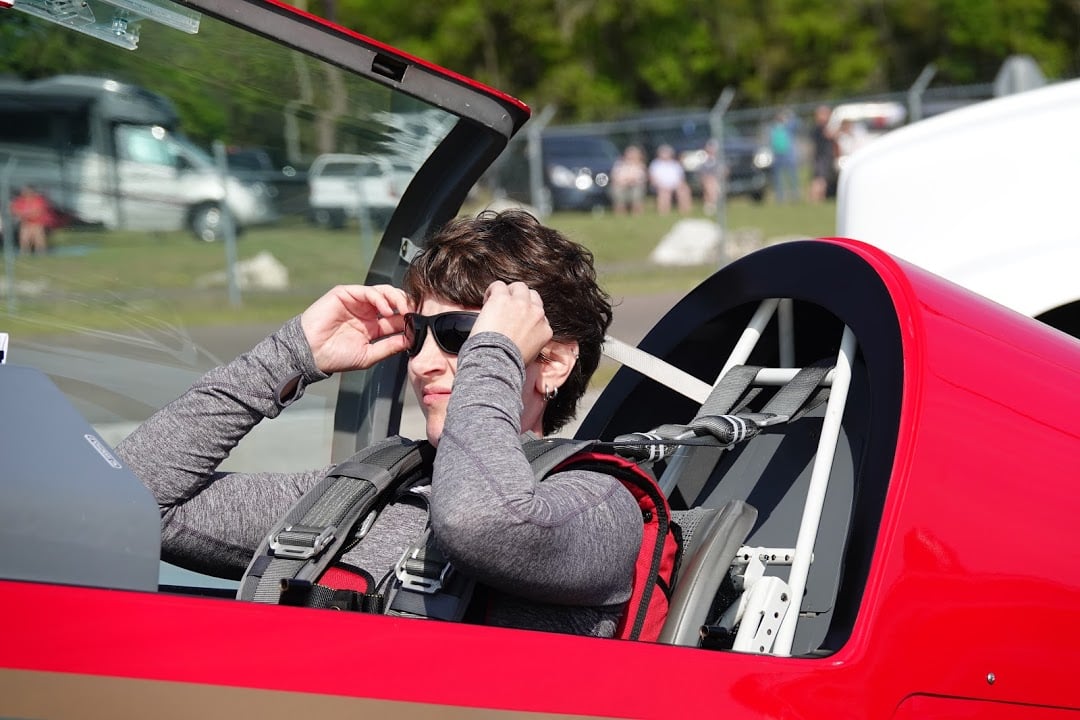 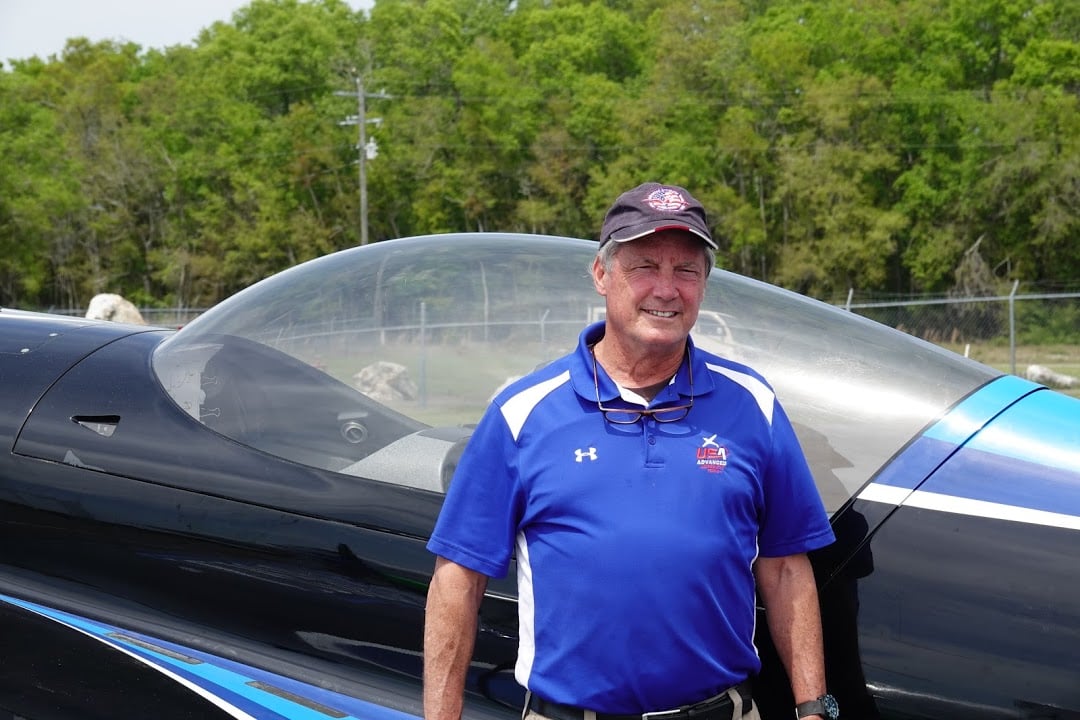 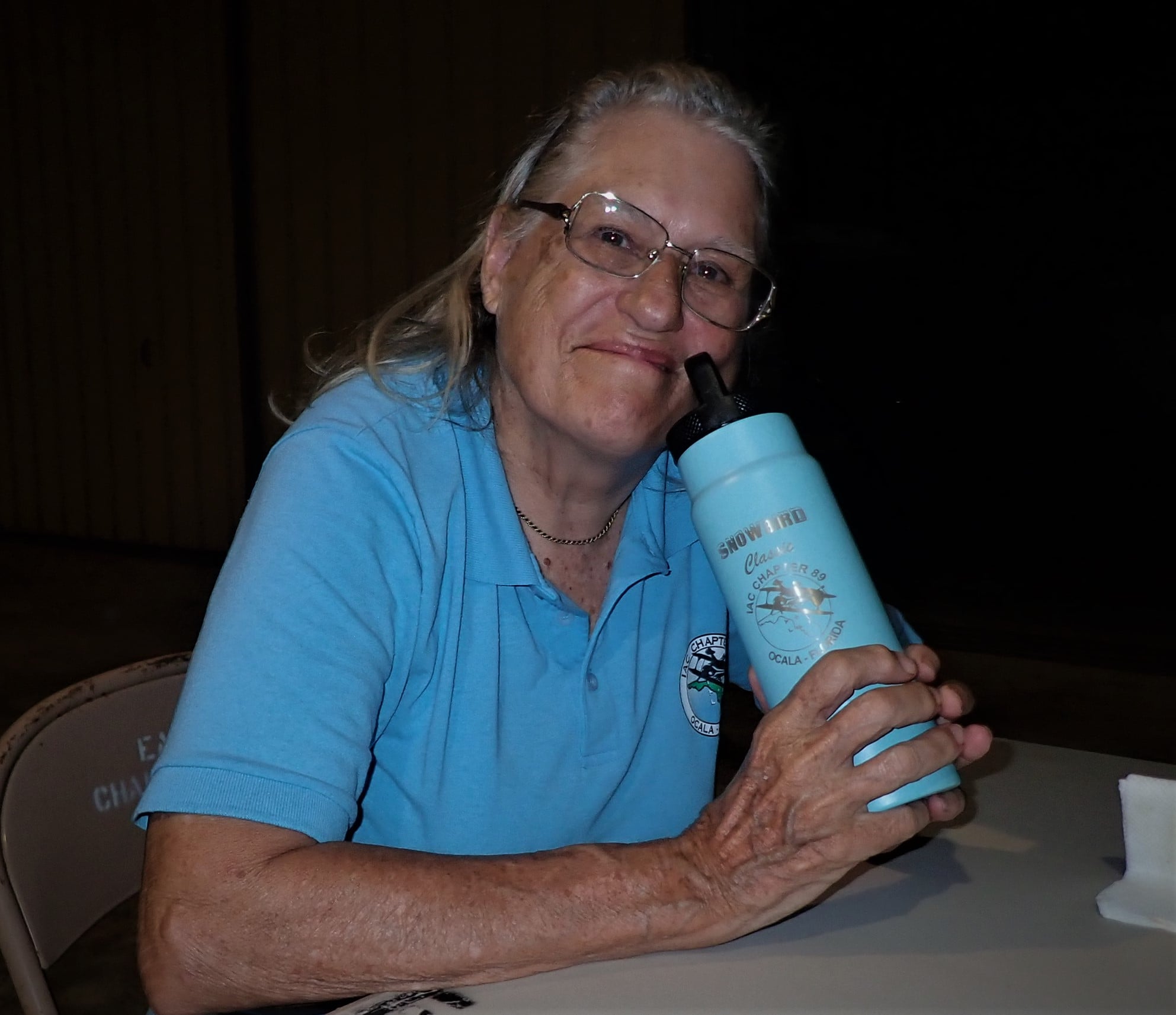 Morning Practice and critique session for the low
er categories with afternoon reserved for flying the Advanced Known. Lunch - YUM! Barbeque for all. Really hit the spot. Thanks to Nora Johnson, Liza Weaver (registrar pictured right) and Mark Stewart for providing and helping with the lunch.

Advanced flying was clean, very few mistakes and well-practiced. Not the norm for the first contest of the season, especially a fter a year-long layoff.. Chris Magon came out on top in the Known with a score of 78.72%, Cody Zorn, flying his DR-109 was second with 77.31% amd Marty Flournoy was third with 76.47%

The annual Snowbird Classic, in Williston, FL, is also this year's IAC Open Championship East. There are 8 Advanced competitors, which include three U.S. Advanced Team members. John Wacker and Marty Flournoy are back again to see who ends up in first place this time - in 2019 John won first place by a narrow margin; 77.63% to Marty's 77.41%. Its gonna be a nail-biter!
There are 8 first-time competitors spread throughout Intermediate, Sportsman and Primary categories.

Informal practice became available today through the 24th. Contest dates are Thursday through Saturday , March 25-27. Final scores can be found online here when they are uploaded by the scoring director: https://iaccdb.iac.org/