Skip to main content
By Mike Heuer
IAC Historian
Dan McGarry, age 83, passed away on October 6, 2021, and IAC lost a wonderful and devoted pilot and friend. Dan was the quintessential member – quiet, unassuming, and no drama. He loved aviation, aerobatics, and competition.
He joined IAC almost immediately after our formation in 1970 and carried membership number 30. Like many early members, he was of the Chicago area where most of the founders of IAC were from and the home of IAC’s first chapter. In the late 1960’s and early 1970’s, the upper Midwest was a hotbed of aerobatic activity – though small in size – and the pilots who were part of that cadre became IAC’s initial members.
Dan’s history in aerobatics started in 1969 with one of his first contests being the Antique Airplane Association’s annual competition in Iowa in late August. At the time, he was flying a beautiful Clipped Wing Cub and entered what was then called the “Primary” category, the equivalent of today’s Sportsman. We also used to have practice sessions and get-togethers at our family’s airstrip in northern Illinois and Dan, as well as his close friend Don DeWitt (who also had a Cub), were always there. It was at one of those sessions that I got to fly Dan’s Cub, my first flight in a clipped-wing, and I enjoyed the airplane as much as I did our Pitts S-1S. It was a particularly good performing airplane with a 90 hp Continental. The Cubs became emblematic of IAC’s emphasis on what we had termed “grass roots aerobatics” at the time. 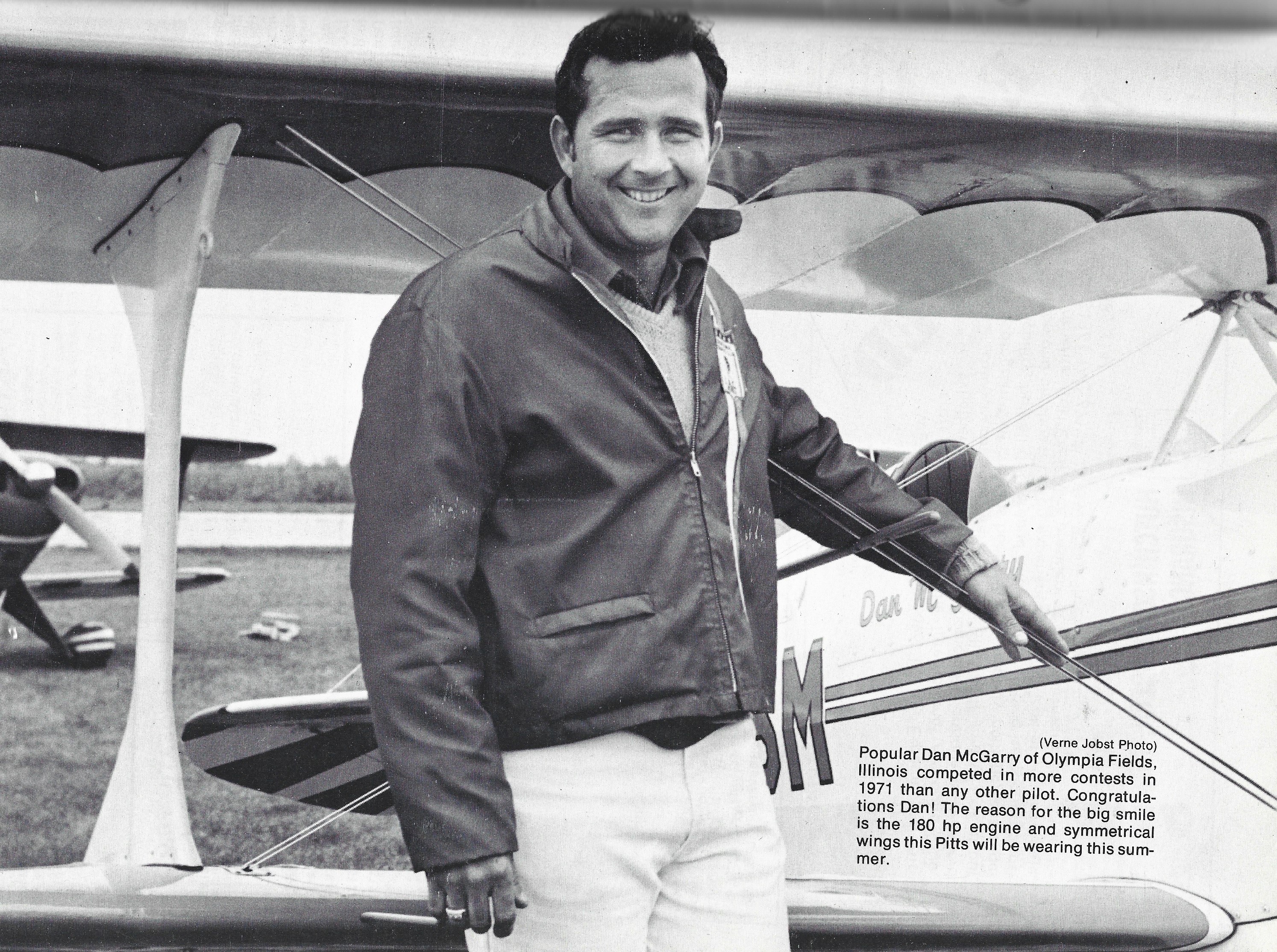 Dan went on to fly at IAC’s very first sanctioned competition in May 1970. It was held at the now defunct Chicago-Lansing airport and was a Sportsman-only event. He took first place. He was an active competition pilot in 1970 and took in IAC contests in Fond du Lac (8th out of 23 Sportsman pilots); Centralia, Ontario, Canada (2nd out of 17 Sportsman pilots); and Newnan, Georgia (2nd out of 11 Sportsman pilots). Those were the days of IAC chapters being formed all around the country, including in Canada, and immediately hosting aerobatic contests.
IAC’s Achievement Awards program started in the Spring of 1971 and Dan was there to help launch the program. In May 1971, he qualified for Intermediate with Stars (the first to do so), Basic (#16), Sportsman (#10), and Intermediate (#7) smooth patches. Pictured here - from the back cover of the December 1971 issue of Sport Aerobatics - Dan had flown more contests than any other pilot in 1971.
It was in 1972 that he moved up and changed to a Pitts and flew Advanced at Fond du Lac and the Nationals that year. He became what we might call a “career” pilot in Advanced and you would see him at Fond du Lac for many years, enjoying his time in the box and with friends. Fond du Lac was one of the most friendly and enjoyable contests of all time. He later extensively modified his Pitts S-2A N8028 and it had a unique look and remains in his name to this day. It sports a Lycoming IO-540.  But he also enjoyed flying other airplanes including a Midget Mustang and a single-seat Pitts that he had in his collection at one time.
Dan served on the IAC Board of Directors and in 1980, under the leadership of Carl Bury, constructed the small IAC building at Oshkosh which served as our headquarters during the EAA Fly-In (now EAA AirVenture) until 1991 when the new Pavilion was built. Dan was in the construction business in the Chicago area and put up the building in record time. That was a banner year for sport aviation and aerobatics, as WAC 1980 was held in Oshkosh and many of us spent a full month in Wisconsin that year, working at WAC, the EAA Fly-In, and then on to Fond du Lac for the IAC Championships. The IAC building was open all during WAC and we added a lot of international members to the IAC ledger that year.
Dan was a wonderful example of selfless volunteerism that has characterized our organization for the last five decades, in addition to being an accomplished competitor. His last competition at Fond du Lac was in 1995 – still flying the Pitts, still in Advanced – and a record 25 years of flying in that contest.
A builder, an innovative mechanic, and a delightful personality – we will miss you, Dan.