The award was conceived and donated by L. Paul Soucy of Louisville, Kentucky. Mr. Soucy was one of the first members of IAC and the Board of Directors. His purpose was to recognize not only skilled pilots but also those who supported a minimum number of contests as well as the U.S. National Aerobatic Championships.

Congratulations to Nicholas Meyer who is recognized as the IAC competition pilot who achieved the highest percentage of points possible during the 2016 contest season by competing in three or more contests, one of which is the U.S. National Aerobatic Championships. The master trophy remains on display at the IAC Pavilion in Oshkosh, Wisconsin. A laser cut plaque with a photograph of the permanent trophy set in the plaque will be awarded to Nick during the IAC Gathering dinner on Friday night, July 28th, in the Nature Center at EAA AirVenture, Oshkosh, Wisconsin. 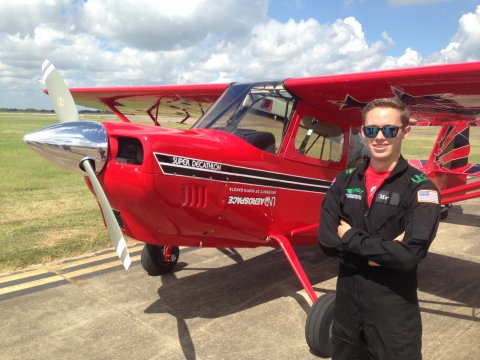 In the 2016 contest season Nick flew in three contests as a Primary Power competitor in the Mid-America Region and the South Central Region as well as at Nationals scoring an overall average of 85.44%.

Check out Nick’s video in a Decathlon during his early days of training: https://www.youtube.com/watch?v=0byHN6fMOIo

Past winners and additional information on the L. Paul Soucy Trophy may be found here.