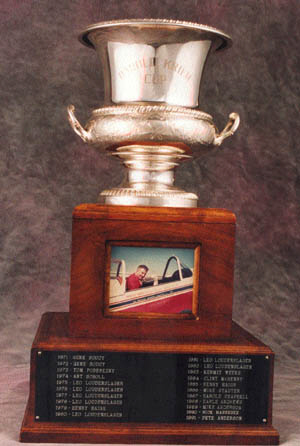 The award was conceived and donated by the Aerobatic Club of America. It was turned over to IAC when our organization took over responsibility for administering the sport of aerobatics in 1982. The award was presented at the Nationals from 1971 to 1983 to the U. S. National Aerobatic Champion. The award is named after veteran aerobatic pilot Harold Krier of Ashland, Kansas who was the 1968 U. S. National Aerobatic Champion and a U. S. Aerobatic Team member. He lost his life in 1971.

Criteria
Presented to the winner of the powered Unlimited category at the IAC Championships.

Procedures
A laser cut plaque is ordered by the Executive Director along with the other trophies. No name is inscribed.

Presentation
Recipient trophies are funded by IAC and consist of a laser cut plaque with a photograph of the permanent trophy set in the plaque. The master trophy remains on display at the IAC Pavilion in Oshkosh, Wisconsin. The plaque is presented at the IAC Championships annual awards banquet each year.