Introduction to Aresti, by  Brian Howard

The elements used in these figures are horizontal, vertical and 45° lines. These describe straight flight in these directions. Parts of loops connect these line segments. Rolls in 1/4, 1/2, 3/4, etc. increments up to 2 rotations can be added to the lines.

Rolls on vertical lines and on 45° lines have to be centered on this line to score well. Any deviation from the center results in a downgrading during a competition.

The K-values included with the competition figures give an indication of the difficulty of each of these maneuvers. Higher K-values mean more difficult maneuvers. Each figure is assigned a score from 0 to 10, which is then multiplied by the K factor. 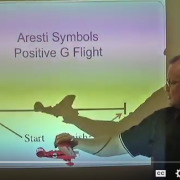 A brief discussion of the Aresti Symbols by

There are four basic types of rolls: Aileron Roll, Barrel Roll, Slow Roll, and Snap Roll. The aileron and barrel rolls are not flown in aerobatic competitions.

Aileron rolls are flown with the rudder and elevator in the neutral position during the roll. The aileron is fully deflected in the direction of the roll. This is the easiest of the rolls to fly.

The Barrel roll is a combination between a loop and a roll. You complete one loop while completing one roll at the same time. The flight path during a barrel roll has the shape of a horizontal cork screw. Imagine a big barrel, with the airplanes wheels rolling along the inside of the barrel in a cork screw path. During a barrel roll, the pilot always experiences positive Gs. The maximum is about 2.5 to 3 G. The minimum about 0.5 G.

Slow rolls are flown normally on a straight line (one exception is rolls flown at the top of a loop). The roll rate has to be constant and the flight path must continue in a straight line. This requires constantly changing rudder and elevator control inputs throughout the roll. Hesitation or point rolls include stops at certain roll angles. Two-, four-, and eight-point rolls are allowed. A notation such as 2x4 denotes two points of a four-point roll. A number by itself (2, 4, or 8) means a full 360º roll with the specified number of hesitations. If no points are specified, rolling is done without hesitations. A roll symbol that starts at the line denotes a half roll (see description of the Immelman). A roll symbol that crosses the line specifies a full roll (first figure). 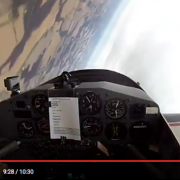 A detailed explanation on how to properly execute a competition Slow Roll to the IAC judging standards. 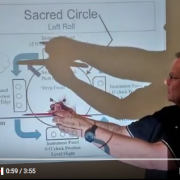 This is a detailed explanation on how to properly execute the Point Roll maneuver to the IAC Competition judging standards.

Snap rolls are normally flown on a straight line (one exception is the avalanche). A snap roll is similar to an accelerated horizontal spin – essentially an autorotation with one wing stalled. Figure 1 shows the symbol for a regular (inside) snap roll. Figure 2 shows an outside snap. In the inside snap, the plane is momentarily stalled by applying positive G forces. In an outside snap, the plane is stalled by applying negative G. In both cases rudder is then used to start autorotation just like in a spin.

This is one of the most basic maneuvers, but not easy to fly well. It has to be perfectly round, entry and exit have to be at the same altitude. To achieve this, the pilot must adjust for ever-changing speeds and G-loads, as well as wind drift.

The maneuver starts with a pull-up of about 3 to 4 G. Once past the vertical, the back pressure on the elevator is slowly relaxed to float over to top of the loop to keep it round. Past the top, the back pressure is slowly increased again throughout the back part till horizontal flight. The plane has to stay in one plane with the wings perpendicular to the flight path. Rudder is used to maintain a constant heading throughout figure and ailerons are used to maintain the orientation of the wings. 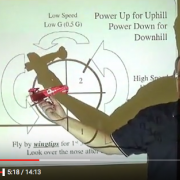 This is a detailed explanation on how to properly execute a Loop to the IAC judging standard.

This is a variation of the basic loop. The two vertical lines and the horizontal line on top have to be of the same length. The exit line at the bottom has to be at least as long as the other three sides. The quarter loops that connect the four sides have to have the same radius at each corner.

This is another variation of the basic loop. The two vertical lines, the 45° lines and the horizontal line on top all have to be of the same length. The exit line at the bottom has to be at least as long as the other seven sides. The eight loops that connect the eight sides have to have the same radius at each corner.

The figure starts with a half loop to inverted flight. A half roll then results in horizontal upright flight. This trades speed for altitude. 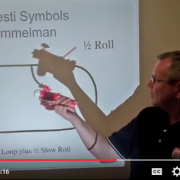 This is a detailed explanation of the Immelman to competition judging standards.

The figure starts with a half roll to inverted followed by the second half of a loop downward.

This is another maneuver to reverse direction. This one, like the Immelman, does not preserve speed and altitude. In this case it trades altitude for speed.

Five-eighths of a loop to a down-line at a 45° angle. The plane is inverted at this point. Centered on this downline is a half roll from inverted to upright. A pullout to horizontal completes the figure.

This is another one of the maneuvers that reverse direction. The downline can be used to adjust the altitude and speed at the end of the figure. 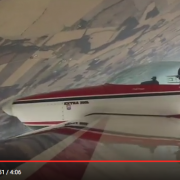 This is a detailed explanation of how to properly execute a Half Cuban Eight to the judging standards of competition aerobatics.

This figure starts with a pull to a 45° up-line. Centered on this line is a half roll from upright to inverted. Five-eighths of a loop complete the figure to horizontal flight.

This figure is similar to a Full Cuban Eight, but the second loop is an outside loop. Again, the two loops have to have the same radius and have to be flown at the same altitude, and entry and exit altitudes have to be the same.

It starts with a quarter loop into a vertical climb. When the plane stops climbing, it pivots around its vertical axis (which is now horizontal). The nose moves in a vertical circle from pointing up through the horizon to pointing down. After moving vertically down to pick up speed again, the maneuver is finished with the last quarter of a loop to horizontal flight. This figure can have optionally rolls on both the up-line and the down-line.

The quarter loop is flown just like the first part of a loop. When the plane is vertical, the elevator back pressure is released completely. During the vertical line up, some right aileron and right rudder is needed to maintain the vertical attitude because of the engine torque and p-factor. When the plane has slowed enough, full rudder initiates the turnaround. It is followed by right-forward stick (right aileron and forward elevator) to keep the plane from torquing off. The pivot is stopped with opposite rudder when the nose points straight down. When the pivot is completed, the ailerons and rudder are neutralized. Elevator and rudder are used to keep the nose pointing straight down. The pivot must be completed within ½ wingspan. Rolls on the downline require only aileron input if the plane is trimmed correctly.

This maneuver is sometimes called a hammerhead stall. This is not an accurate name because the airplane never stalls. The airspeed may be very low, close to zero, but since there is no wing loading during the turn-around, there is no stall (at zero g wing loading, a wing does not stall). The plane is flying throughout the maneuver with all the control surfaces effective (although sometimes only marginally so).

This also is one of the maneuvers that have been used to reverse direction while adjusting altitude and airspeed by changing the length of the down-line. 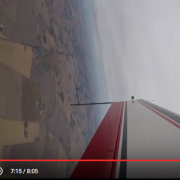 This is a detailed explanation on how to properly execute a Hammerhead to the IAC competition judging standard. 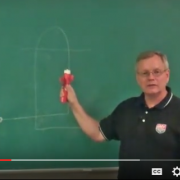 This is a detailed explanation on how to properly execute the Humpty Bump maneuver to the IAC Competition standards.

Competition turns are not the coordinated maneuvers that you use in normal flying. In a competition turn you first roll to a bank angle of at least 60°. Once the bank is established the turn is started. The plane has to maintain a constant bank and altitude throughout the turn. At the end of the turn, the turn is stopped and then the wings leveled for horizontal flight. The example shows the symbol for a 270° turn. 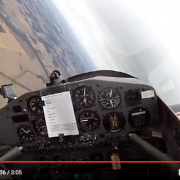 This is a detailed explanation on how to properly execute an Competition Turn to the IAC's competition judging standards.

This maneuver combines a turn with rolls. The example shows a 360° turn with four rolls to the inside. The plane has to maintain a constant roll rate, constant turn rate and constant altitude throughout the rolling turn. This maneuver is quite difficult to fly. It requires constantly changing inputs from all three controls (rudder, aileron, elevator).

These maneuvers involve bringing the airplane to a complete stop in a vertical attitude and then sliding back a visible amount. The airplane must then tip over and fall through a vertical down position. Figure 3 indicates a tailslide with the wheels down during the flip. Figure 4 is a tailslide with the wheels up (inverted) during the flip. Going into the figure and coming out, the same rules apply as for other figures (quarter loops of constant and equal radius, vertical lines).

Spins come in 1, 1¼, 1½, 1¾, and 2 turns. Spins may be entered from upright or inverted horizontal flight. During spin entry, the plane has to show a stall break, followed by the auto-rotation. The rotation has to stop exactly after the specified number of turns. Once the rotation has stopped, a vertical downline has to be established. 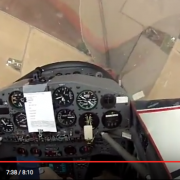 A detailed description on how to execute an aerobatic Spin to the IAC Judging standard.

The Chandelle is not used in aerobatic competition. On the FAA power commercial pilots test a Chandelle is defined as a maximum performance climbing turn through 180 degrees while maintaining a constant turn rate. The idea is that this is a "plan ahead" maneuver. You first establish a medium bank depending on the performance of your aircraft. Then a smooth pull-up is started. The angle of bank stays constant during the first 90 degrees of turn, while the pitch angle increases steadily. At the 90 degree point the plane has the maximum pitch angle which should be close to the critical angle of attack. During the second 90 degrees of turn, the pitch angle is held constant, while the bank angle is smoothly decreased to reach 0 degrees of bank at 180 degrees of turn with the airspeed close to the stall speed. The plane should not settle during the last part of the maneuver and the recovery. The decreasing bank angle during the second half of the Chandelle will maintain a constant turn rate together with the decreasing airspeed. The turn needs to be kept coordinated by applying the right amount of rudder. A Chandelle to the left is quite different than one to the right because of the ever increasing amount of p-factor in the second half of the maneuver.