The Achievement Awards program was conceived in 1970 by Verne Jobst, IAC President at that time, with many years as a glider pilot. Verne wanted a equivalent to the popular soaring badges. He, Bob Davis and Mike Heuer completed the set of rules in May 1971. The first pilot to qualify for an award was 16-year-old Debbie Forshee, from Louisiana, who flew for the Basic Patch. In the Fall of 2006, the IAC Board approved a design of a new Achievement Award, in a series of pins and accompanying decals.

Each category is represented by a different color. Smooth awards and stars awards, with stars in the concentric circle, were designed.  Aerobatic competitors can earn achievement awards that signify the level of proficiency obtained in aerobatic flight. There are two types of achievement awards available: Smooth Awards and Stars Awards.

Smooth awards are earned by flying a designated set of figures in front of a judge or by flying with a qualified CFI who gives them a qualifying grade. The list of current IAC Judges list can be found by clicking on Programs -> Judges -> List of Current Judges. CFIs are confirmed through their CFI number. Awards are available for powered aircraft and gliders.

Star awards must be earned while flying competition aerobatics at an IAC sanctioned contest. Awards are available for powered aircraft and gliders. 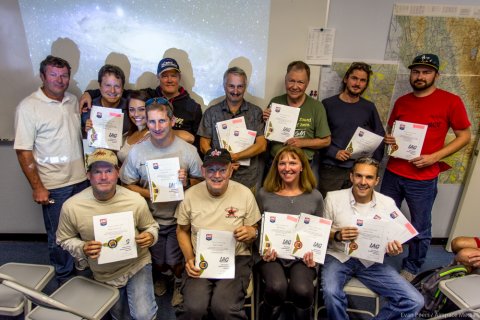 To order, send completed form to: