Each pilot who flies aerobatics owes a debt to those pioneers who preceeded us. No one of us created the knowledge we now display without having the hard earned lessons of our predecessors given to us by someone, in some manner. Many of these pioneers have been honored by induction into the International Aerobatics Hall of Fame. These short biographical sketches will help each of us to better understand the roots from which we spring. 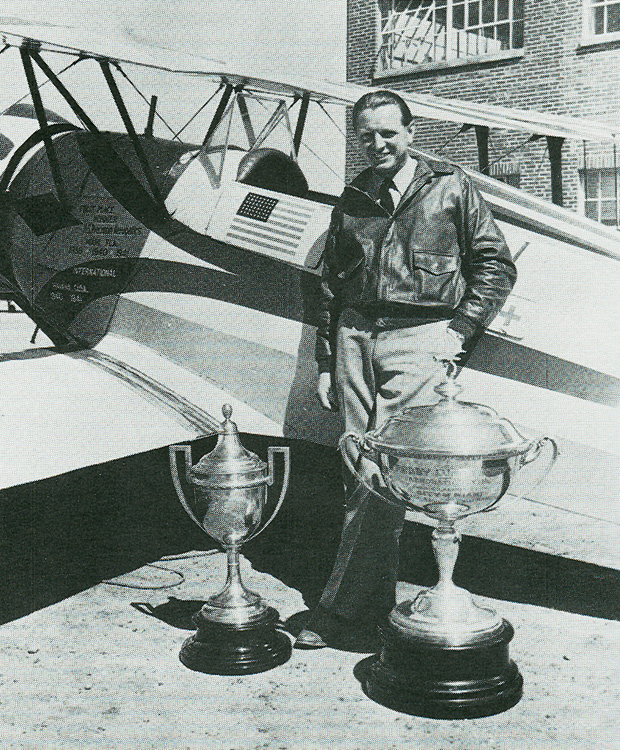 One of the grandest trophies in the display case at the International Aerobatic Club’s building at Wittman Field, Oshkosh, Wisconsin is the Murphy trophy. It was conceived and donated by the late Mike Murphy. The engraved plaques on the base memorialize the winners of the United States National Championships.

This article is for newcomers who may wonder, ‘Who was Mike Murphy’.

Mike was born in 1907. His career in aerobatics was over thirty years in length. He was a pioneer aerobatic competitor, judge and leader in organizing competition aerobatic contests in the United States.

He was also a pioneer airshow pilot who developed a top and bottom landing gear act for making inverted takeoffs and landings. He also demonstrated J-3 Cub seaplane take-offs and landings from a runway. He used a car-top wooden landing rack for take-off and landing on the top of a moving automobile with a wheeled Cub.

In his competitive era, Mike was the winner and thus permanent host for the Lund Trophy for winning the Miami All American Air Maneuvers three consecutive times.

Internationally, Mike was the first U.S. delegate to CIVA. He was delegated to critique the first World Aerobatic Championships and planned the second WAC. He participated as a judge in the WAC in 1962. He was among the protesters of the then existing nationality bias in judging. This protest led to the development of the Tarasov system of judging which has now gone on to become the standard for the world. It is now known as the Tarasov-Bauer-Long system. Mike later was a judge at the WAC of 1966.

Later, he was elected President of CIVA and was thus the first U.S. citizen to be so honored (and challenged).

Mike Murphy was the first American to own a Bucker Jungmeister. The aircraft flown by Alex Papana was severely damaged when it was taxied into by another aircraft. Mike bought the wreckage and rebuilt the aircraft. He flew it with great success and was never defeated in competition. He sold the aircraft to Bevo Howard in 1948, who flew it on the airshow circuit. Bevo lost his life in the machine when he hit a tree. The wreckage was subsequently restored. The aircraft is now on display at the Smithsonian.

Joining with other illustrious airshow performers of that era, Mike Murphy was a founding member of the Aerobatic Club of America (ACA).

In 1942, Mike Murphy entered military service and was one of those who planned the glider drops on D-Day. He trained many glider pilots. On D-Day he participated in the D-Day drop and was injured in combat. On retiring from the service in 1945, Mike had been awarded the Legion of Merit, the Air Medal and the Purple Heart Medal.

Mike died in 1981 at the age of 74 having enjoyed a remarkable aviation career. Mike was awarded the Gold Medal of the FAI the highest award given for contributions to international aviation.

Mike served aviation and his country with distinction and honor. He became a wonderful role model and inspiration for all of us who follow.