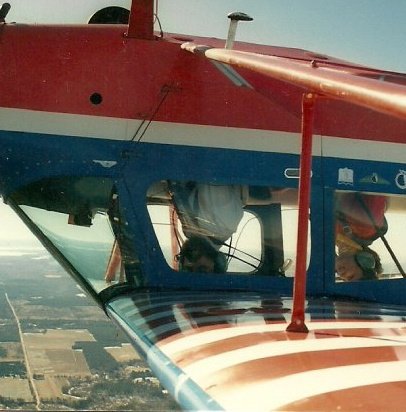 WHAT!!! Did I just read that correctly? While cruising through Air Facts, I stumbled upon this headline on an article by Mac McClellan: “Why Upset Training Just Doesn’t Work.” Mac is an ATP with more than 10,000 hours in several business type jets and has been an aviation writer for more than 40 years. Tamping down my irritation, of course I had to read the article and see where Mac was coming from.

I remained hot under the collar for the first third of the article when I read this: “But what you learn tumbling through the sky in an upset recovery course won’t do any good in real life flying in a business jet, or even a personal piston single.”

Having taken beginning aerobatic lessons myself, and greatly benefitting from the experience, as well as being married to an aerobatic and tailwheel instructor, I could not let this go. I fired up my computer and began to type furiously. After sending out multiple emails to some of our IAC members that are involved in Upset Prevention and Recovery Training (UPRT), I began receiving their responses.

“I have to say that overall I disagree with most of the article written about UPRT being useless,” said Alain Aguayo, IAC 435356. “I’m a huge advocate of it and it’s what I’ve done most of my aviation career, but [Mac] does have a few good points.

“A lot of the things taught in UPRT are taught wrong or it’s too cookie cutter. And unfortunately, some of the techniques and procedures we learn don’t translate well in the 121 or 135 worlds. A jet simply does not roll upright at 400 degrees per second and you might not be able to get away with huge rudder inputs like we are accustomed to doing in our aerobatic aircraft (just to give a few examples).

“A program has to be tailored to your operation and should not be generic. Again, this is just my view, having done UPRT in 91, 121, and 135 environments,” concluded Alain.

My husband, Gordon Penner, IAC 429704, who is a Boeing 767 captain, is the expert in our household on flying commercial jets, so I asked what he thought about the article. While he also agreed with Alain’s and Mac’s observations that jets are a completely different animal than a personal general aviation aircraft, the value of UPRT for those flying in the jet environment is very valuable indeed. He likens UPRT to the story about picking up Aunt Martha at the airport.

As a young man, the first time he was asked to pick up his Aunt Martha at the airport he had not seen her since he was 4 or 5 years old. He wasn’t exactly sure what she looked like. Old and wrinkled with gray hair. Well, that could be about 33 percent of the people at the airport. So, after a half-hour of waiting and looking, afraid he would mistake her with someone else, he finally spotted her in the straw hat with flowered headband that his mother had given her on his aunt’s 75th birthday.

The next year, when he was asked to pick up Aunt Martha, he confidently drove to the airport and greeted her immediately. He knew her, he had seen her before, there was no hesitation. The same confidence is employed during an unexpected upset in the aircraft when one has received UPRT. We recognize what is happening and we know what to do.

“In my humble and limited years of aerobatic instruction I found that simply the startle factor and immediate tunnel vision, accompanied by a complete loss of orientation, associated with truly unusual attitudes or flight regimes as experienced by a high percentage of first-time loss-of-control trainees, totally justifies and supports LOC training goals,” said Don Weaver, IAC 26681. “If a person can’t keep up with what’s going on in the sky, all the high-minded classroom training on avoiding problems and/or recoveries means absolutely nothing, and until those pilots have actually done it, they have no idea they’ll essentially shut down or do exactly the wrong things in many situations.”

Getting back to Alain’s perspective that training should not be generic, but tailored to the specific environment that the pilot will be flying in, Greg Koontz, IAC 20242, contributed a different perspective.

“Mac made some statements I think are easily arguable. UPRT is probably wasted on many pilots out there who don’t fly; they are executing a series of memorized procedures,” Greg said. “My personal method (of training) adds some behavior adjustment, that is, a different way to understand how a plane flies. No new physics here; just a serious return to basic stick and rudder with getting out of the normal envelope added on. I call it three-dimensional thinking. I work to draw the student away from memorized procedures (push, roll, step on the sky) by developing a better understanding of how it all works. All of us who survive in the aerobatic world have developed a certain understanding.”

Bruce Williams, IAC 27782, wrote and posted a full article on Beechtalk.com titled “Value of URT.” His full article can be accessed on the IAC website: https://www.iac.org/value-of-urt .

One of the points he makes in his article also revolves around training and the quality of that training. “Mac is a careful writer (and thinker), and he makes several good points about URT that echo arguments long made about other areas of flight training, especially spin training. But his central point is based on a straw-man argument that the URT and aerobatics communities may have inadvertently helped him set up.

“I hesitate to put words in Mac’s mouth, but I think he meant, in part, to raise a key issue with URT courses. Namely, that URT students often seem to think the training will allow them to escape an upset in most (all?) circumstances. And some URT providers and advocates at least imply that the training can deliver on that goal,” Bruce wrote.

Bruce gets back to the startle factor that Don brought up.

“URT addresses a key issue that affects pilots in all stressful situations, but especially in loss-of-control incidents: startle factor,” Bruce wrote. “You’re unlikely to respond effectively the first time the airplane suddenly departs stable flight, wings-level or from a standard, coordinated turn, into an overbank that exceeds 45-60 degrees (not necessarily > 90 degrees or inverted) with an abrupt pitch down.

“Every flight instructor has seen the startle effect in action when students first experience stalls. In fact, I often see the startle factor (and its cousin, anticipatory dread) when I ask flight review customers — many of them experienced pilots — to demonstrate even basic stalls. At the break, a wing drops, and the instinctive response, heightened by the fear of a spin, is applying aileron against the yaw-induced roll.”

In the corporate world, Randy Brooks, IAC 436808, currently works at Aviation Performance Solutions. When I sent my email, he was in the process of writing up a response to Mac’s article. Because APS felt the subject so important and extensive, they prepared an account of 14 high-level topics that encompass the many misconceptions or incorrect statements made in the article. This commentary, 14 Issues with “Why Upset Training Just Doesn’t Work” Published by Air Facts Journal, can be found on the APS website (apstraining.com).

From the APS website, part of the initial response states:

“In the article ‘Why Upset Training Just Doesn’t Work,’ published by Air Facts Journal, the author attributes airplane upsets to ‘careless’ or ‘poorly trained’ pilots and shares several opinions as to why upset training will not prevent Loss of Control In-flight (LOC-I) related accidents. Unfortunately, these representations display a general lack of understanding of modern Upset Prevention and Recovery Training (UPRT) while perpetuating an outdated view of what today’s UPRT accomplishes. A clarification of some basic facts about UPRT and LOC-I prevention would establish a foundation from which a more robust and insightful discussion can be presented.”

With that said, there are a number of points made by the author we agree with:

Here is a summary of the topics APS addresses in their response:

It is well worth the read and most of my email group agreed.

“Bravo! I was steaming when I read Mac’s article, and I’m pleased to see that you have compiled a comprehensive rebuttal that should be required reading for every airman,” said Ron Schreck, IAC 433751.

“Very nice article! Or should I say very professional, precise, and thought-out,” Greg said. “It prompted me to go to the APS website and get more familiar. You guys are clearly the best voice for a rebuttal.”

Since 2015, the FAA has had a national #FlySafe campaign to help educate GA pilots about how to avoid loss-of-control accidents. In an online article, “Fly Safe: Prevent Loss of Control Accidents,” the agency states, “LOC is the No. 1 root cause of fatalities in GA accidents. More than 25 percent of GA fatalities occur during the maneuvering phase of flight. Of those accidents, half involve stall/spin scenarios.” However, in the article itself the FAA offers GA pilots a series of safety precautions to take before every flight:

What I found interesting about this list was that they say are trying to prevent LOC, but only tips about airplane maintenance are given and nothing is recommended for flight training of any kind. The reason this is interesting is that the contributing factors in LOC have more to do with things like:

This certainly looks like a list of things that could benefit from UPRT! The saving grace of this FAA article is that it provides a series of articles that show you how you can incorporate safety into every flight. Fortunately, these articles include a few on training, and one in particular caught my attention: “Emergency Procedures, Training, and Why You Need to Prepare for the Unexpected.”

This is my favorite paragraph in the FAA emergency procedures article and the one that hits the nail on the head of what all our contributors have been saying:

Every time you take flight, you need to be ready for the unexpected. Engine failures, inflight emergencies and other problems come up when you least expect them. However, if you train for these mishaps, your chances of survival increase.

Whether you call it the startle or pucker factor, or just recognition, if you’ve never seen an upset in flight before, you are going to be surprised. Your reaction may be to shut down or do exactly the wrong things in your situation. UPRT is not useless. Education to prevent a tragedy is worthwhile.