On the first weekend in September, the IAC Chapter 126 Buffalo Wings hosted their contest at Olean, NY. Winners were:

The following report comes to us from Hella Comat, who competed Advanced at the contest. Take it away, Hella! 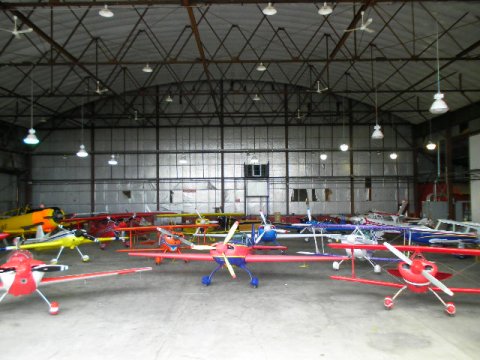 From a 1952 Harvard to a brand new Extra 330 and with the remaining 13 aircraft in between, the Bill Thomas U.S./Canada Aerobatic Challenge illustrated the broad variety of aerobatic airplanes that participate in IAC contests. The enthusiasm was widespread too: two days before the contest, many pilots had already arrived at Olean, NY - KOLE - to familiarize themselves with the aerobatic box and get in some last minute cramming.

The Cattaraugus County, Olean Airport (soon to be renamed after aerobatic legend Bill Thomas - but more about that later) is located in the wooded ski hills of western New York state. It is at an elevation of 2135 feet and the unusual high density altitude on hot practice days Thursday and Friday offered pilots the challenge of flying aerobatics at about 9000 feet!

Generous critiquing sessions were offered by Mark Stewart, Bill Gordon, and Chuck Cohen. Thank you! This is a really invaluable contribution to the contest - although we ended up flying only one flight each, most of the pilots who were able to arrive for as many as four practice sessions agreed that the two days prior to the contest were enormously beneficial. 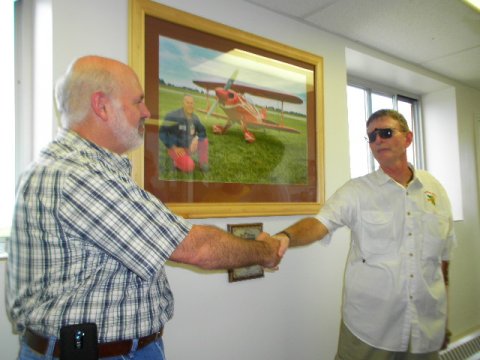 In the afternoon, host Chapter 126 President Pat Barrett arranged a significant presentation to the airport. A large framed photograph of Bill Thomas and a plaque recognizing his accomplishments and contributions to IAC was presented by enthusiastic local supporter of our contest, County Legislator Joe Snyder. Bill was a 2002 IAC Hall of Fame inductee. He was a member of the 1972 U.S. Aerobatic team, winning a silver medal on the first flight in France. He wrote the well known aerobatic instruction books “Fly for Fun” and “Fly for Fun to Win.” Bill based an aerobatic school at the Olean airport. Pat Barrett is also working tirelessly to have the name of the airport acknowledge these significant contributions by including Bill Thomas in its name.

Friday evening marked the beginning of a super gastronomic effort on the part of President Pat, his wife Cheryl, and Treasurer Rob Busch. Chicken wings, to coordinate with Chapter 126’s nickname, The Buffalo Wings, were being deep fried and soaked in contest sponsor Mammoser's Tavern’s own hot sauce as fast as they were being enjoyed. Cheryl’s homemade chili was an additional treat!

The contest had been moved from its original dates in June to September to try to take advantage of the usually fine fall weather. No such luck! Saturday morning started with low cloud which turned into rain. Contest briefings were held every two hours, as the TAFs were encouraging. Sadly, the day passed with no flights.

On the bright side, we had lots of time to hangar fly. Talking to other aerobatic pilots and examining their aircraft offers a wealth of valuable information. And then it’s always just plain fun to get together with people who share the passion of aerobatics.

Then it was time for the feast to continue. All day, President Pat had been preparing turkeys for the banquet - one in a roaster and one in a smoker. Rob had prepared a fantastic selection of make-your-own-salad ingredients. And to top it all off, Cheryl’s chicken and sausage gumbo was spicy and super delicious! For lunch on both days, Rob had also prepared a wonderful buffet of salads and ‘make your own sandwiches’. 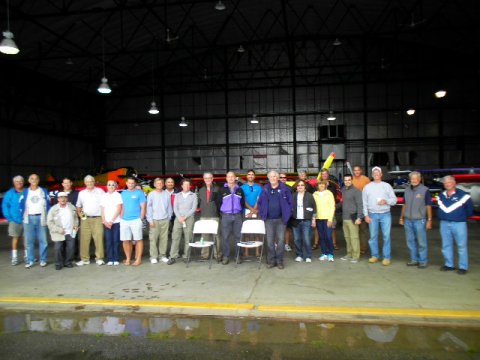 Fortunately, Sunday dawned blue sky and sunshine. The town of Olean is deep in the valley and was shrouded in fog, but by the time we drove to the airport which sits scenically at the top of a hill, the sun had burned it all off. The Sportsmen competitors had virtually no wind and CAVU for their flights. For a short time, 2300 foot clouds from Lake Erie passed over and put a hold on flying. Then it was the Intermediate and Advanced pilots’ turn to fly.

Since competitors came from fair distances and some had more than three hour flights to get home, the contest was declared finished by 2 pm. Only one flight was completed by all pilots.

Dmitri Cuesta in his S-1S and Luc Martineau in his S-2C, both from Quebec, placed first and second in Sportsman. Ron Mann in his newly purchased Extra came a commendable third. Rick Volker provided the best airplane noise of the weekend in his Harvard MK 4. It was a treat to see him fly it! Eric Anderson, who came all the way from Chapter 58, scored within 6% of the winner - a close competition.

Even though he was enduring a miserable cold all weekend, Chuck Cohen took home the first place plaque and medal for Intermediate in his beautiful new black, red, and yellow Extra 330. Chuck has been practising a lot, seeking frequent instruction and critique, and competing at many contests for the past few years. His flying shows his dedication. In second place was this year’s Harold E. Neumann Award winner Jim Wells flying his Giles G-202 and in third place was Canadian Trevor Rafferty in his self designed Javelin, which he flies in air shows as well. Wes Liu, Marc Nathanson, Bill Gordon, Neville Hogan, and Desmond Lightbody provided the usual intense, close competition that the Intermediate category always maintains. Only six per cent separated the top seven pilots.

Mark Stewart won Advanced in his Panzl S-330, followed by Hella Comat in her Pitts S-1T.

Many thanks to Chapter 126 volunteers Roy Berube and John Denardo who worked tirelessly to set up and take down the box markers and sighting devices and were running around helping constantly for the 4 days we were there. Roy, a retired career pilot, also doubled as the contest bugler. He played the national anthems of the two countries in the contest name each morning, called us to briefings with his trumpet, and entertained us during the nasty weather on Saturday.

Sincere thanks to Chief Judge Carole Holyk and judges Sandy Langworthy and Chris Pulley who all drove fair distances to the contest just to help out. Volunteer Coordinator Joy McKinney and starter Pat Rebbetoy worked to keep the contest running smoothly. Lucky for Chapter 126, we have a new registrar, Pam Wende, who despite being at only her second contest, prepared meticulously and more than thoroughly to take on the role. She’s a keeper!

Finally thanks to our sponsors, whose contributions were raffled off:

Learn more about Chapter 126, The Buffalo Wings, at: http://iac126.blogspot.ca We’re always thrilled to have new members, or just keep in touch and join us at a meeting, where yummy Buffalo wings are an honored tradition.

See you in Sherman and Denison Texas for the U.S. Nationals!