It is with great sadness that IAC chapter 88 Michigan shared the news of David E. "Dave" McKenzie's, IAC 2032, passing. "Our sympathy goes out to Nancy, his son Mike and family," said Hugo Ritzenthaler IAC 88 Vice President.

"Dave was instrumental in getting chapter 88 started," said Hugo. From a brief history of the chapter, Hugo pointed to Dave's efforts in the 1970s: In the early years the chapter held a series of flying meetings at various local airports in order to gain publicity and new members... We offered aero instruction in 15 and 30 minute segments at the meeting in a further attept at reaching interested parties... Dave McKenzie spent many hours giving instruction...The first IAC 88 contest was promoted and organized by Dave McKenzie in 1977 held in Milan, Michigan.

Dave earned the Primary, Sportsman and Intermediate smooth IAC Achievement Awards and was a regional judge. He was also a Grogan Belt Award winner (received for last place in Sportsman) in 1975 at the chapter's annual aerobatic contest. 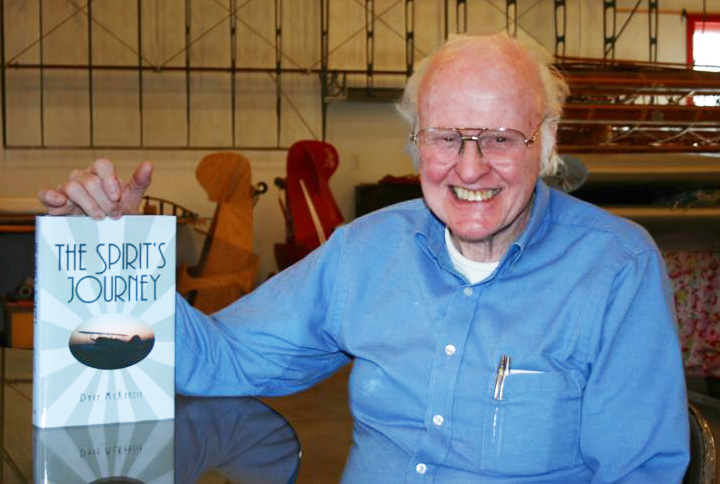 In addition to earning a commercial pilot's license and flight instructing, Dave enjoyed a long career as an automotive chassis designer with Ford Motor Company from 1964 to 2005.

In 2011 Dave wrote a book titled, "The Spirit's Journey", which detailed his story of how he overcame lifelong pressures, family opposition, and incredible personal hurdles to follow his dream of flying an airplane.

From the introduction of "The Spirit's Journey":

The beginning of all of our lives may have been in the infinite past of time and space in a sphere so infinitely small that it would have been impossible to see or feel. Compressed into that infinitely small sphere would have been the nucleus of all the elements that compose the bodies of all things and living creatures that would appear in the future. Perhaps there was an entity composed of energy called, “Spirit” that selected the mixture of elements that became homo sapiens to be the vehicle to transport it through time and space. Perhaps there was an explosion at that time and place that is expanding towards the opposite infinity of the beginning. Perhaps it has already reached that infinity and is now shrinking backwards toward its origin in the original infinity, the beginning.

In a post promoting his book he went on to write, "The hypothesis may be that the energy called “Spirit” selected the collection of elements called “man” to be its “vehicle.” When that creature stood, walked, began to think, and looked skyward it saw the stars and they became its next and ultimate destination.

I’m just a body that is a vehicle being used for transportation by the “Spirit,” and for the “Spirit” to eventually reach the stars it must first be able to fly. Therefore, I’m driven to fly by a force greater than I.