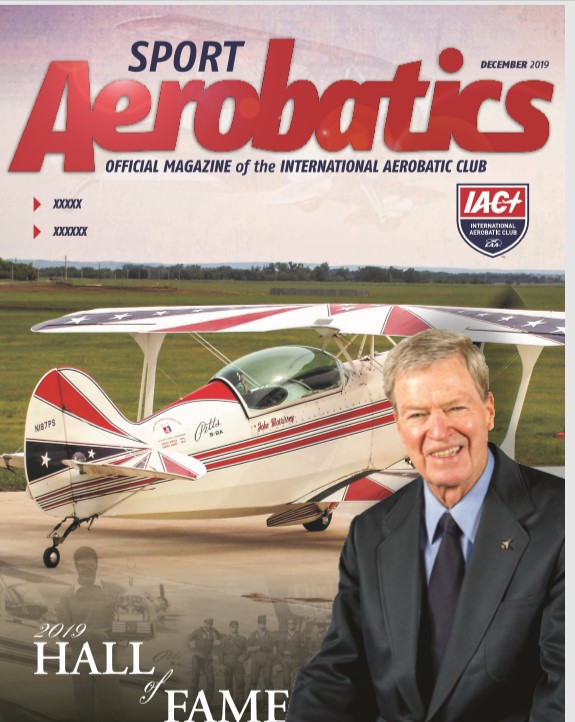 John Morrissey made his first solo in a Luscombe in 1957 and has since explored many aspects of civilian and military aviation. The idea to fly aerobatics germinated when he was flying Cessna 150s at Kansas University in Lawrence, wondering what it would be like to loop a plane. He was commissioned as a second lieutenant in the U.S. Air Force on August 8, 1960, merely one week after his 21st birthday.

The military career gave John access to many of the Century Series fighters (F-100, F-105, etc.), and he ultimately saw active duty during the Vietnam War. John first earned the Distinguished Flying Cross in 1965 against targets in North Vietnam, followed by four Bronze Oak Leaf Clusters for valor in combat, with the last earned Cluster in 1972 flying the A-7. On June 30, 1985, John retired from the U.S. Air Force, having earned the rank of colonel.

During his visits and residence stateside, John maintained an active life with civilian aviation, having purchased a Starduster Too in December 1973. His basic and all-attitude flight training was put to good use in civilian aerobatics. The T-33 training expanded his capacity and interest in unusual attitude flying. He joined IAC as member 3238 and entered competition. He decided to start in the Sportsman category and went to his first competition in 1975. The first year, he flew his second contest in Fond du Lac, Wisconsin, and his third at the U.S. Nationals. The Starduster carried John to sequential Sportsman National Championships in 1976 and 1977.

In 1973, John was flying at Harold Neumann’s grass strip in Olathe, Kansas, on a regular basis. After one of his first aerobatic flights, he asked for some critique, and Harold replied, “Well, you’re not gonna kill yourself.” It was his way of saying that John would do well in aerobatics.

Harold would be a great influence on John in life as well as in aerobatics. In an article in 1978 for the Sport Aerobatics Get to Know Your Member page, he wrote, “I’ll always remember that God may have given me the sky, but it took a gentle man in a white Monocoupe to show me how to enjoy it.”

John’s self-proclaimed lifelong love affair with the Pitts Special began in 1978 when he traded the Starduster for a Pitts S-2A. Bill Thomas, a Pitts dealer involved in the purchase, would also influence John. He didn’t have his first Pitts long when he received an offer of $45,000 on it. He accepted, believing he got the best of the deal, since it was only worth $30,600. Ultimately, he ordered his 1979 Pitts S-2A, serial No. 187, which he still owns and actively flies. The plane is currently used in his flight school, Great Plane Aerobatics.

Flying and instructing in the Pitts, John applied the science, precision, and discipline of his military background to both competition and lessons. In 1979, John moved up to the Advanced category. His methodical pursuit of perfection through efficiency carried John to multiple first-place finishes at the IAC Championships in Fond du Lac, Wisconsin, in 1980, 1984, and 1992. The now-ubiquitous Pitts carried John to yet another U.S. National Advanced Aerobatic Championship, in 1994. 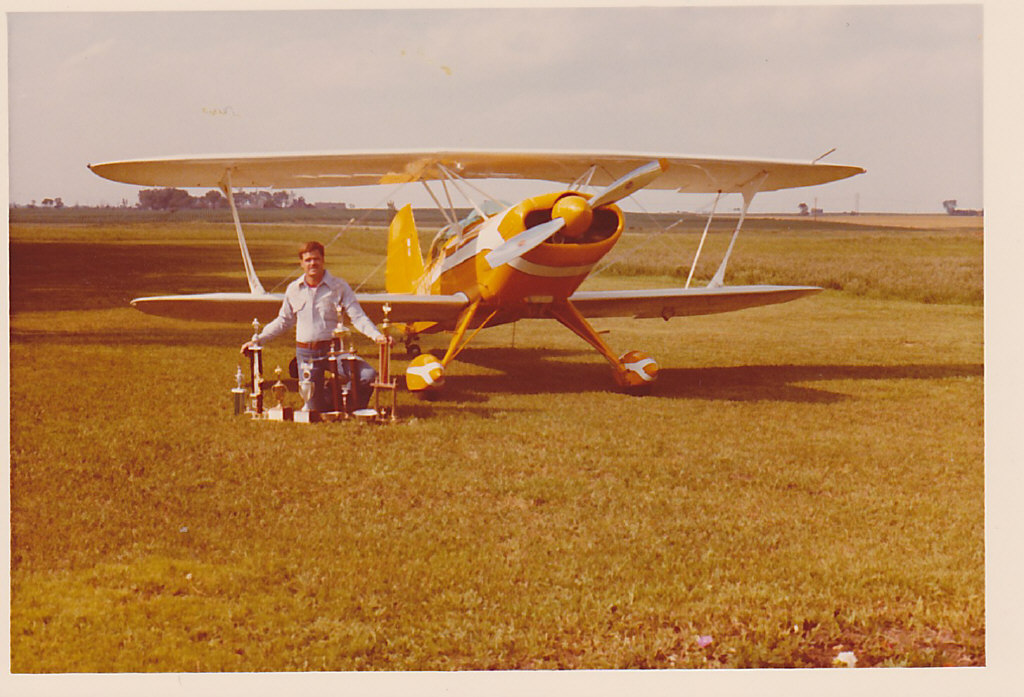 John flew serial No. 187 in Advanced through 1997. He was on the U.S. Advanced Aerobatic Team in 1995 in South Africa and again with the 1997 team in Lawrence, Kansas. John, his son Matt, and Gerry Molidor were the three key components of the gold medal-winning 1997 team. In the first flight, then called the Q, John was leading in the No. 1 position with a score of 80.48 percent. After three flights, Janusz Kasperek of Poland, flying IAC member Damon Wack’s Extra 230, was crowned the World Aerobatic Champion. The American team’s performance was so strong, with Gerry Molidor in second place, Matt Morrissey in third, and John Morrissey in fourth, that the Americans won team gold.

Under CIVA rules, aircraft types allowed in the 1997 Advanced World Aerobatic Championships were restricted. The restrictions were not definitive about horsepower, but excluded aircraft considered to be competitive in the Unlimited category, like Sukhoi, CAP 231, and Extra 300-series aircraft. The airplane of choice was the Yak-55, used by nearly half the pilots. The United States and Japanese teams favored the Pitts types. Two highly modified biplanes were Chris Panzl’s six-cylinder Haigh Special with retractable gear, and the new experimental Pitts S1-11B flown by Matt and John.

John’s switch from the Pitts S-2A he regularly flew in regional contests and Nationals to the S1-11B for AWAC didn’t hinder him a bit. In the September 1997 issue of Sport Aerobatics, he said, “This is the first time I’ve had the horsepower to really work with; the plane flew great.”

Interestingly, competitive aspirations and personal achievement were not the end of the story. John’s talent at the controls and reputation for pursuit of perfection drew a following of students. More than one IAC member has commented on John’s amazing ability to see the maneuver 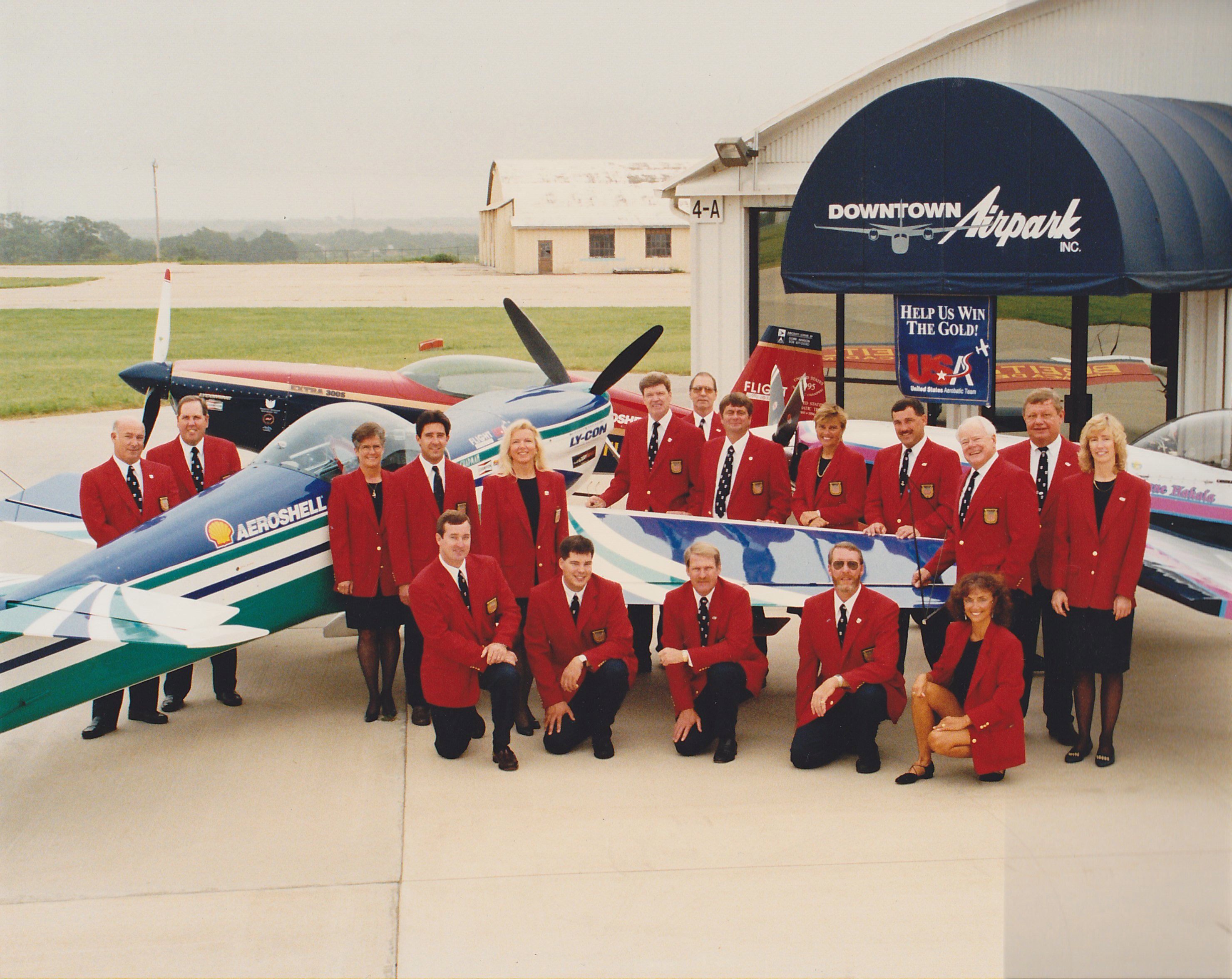 and relate to exactly what transpired in the cockpit to get that result, and how to fix it. That is the hallmark of a superb coach.

John has around 3,600 hours in his own Pitts S-2A, and cumulative time in all factory-model Pitts aircraft, including his time as a Pitts factory dealer, reaches about 5,400 hours. John was a dealer with T.J. Brown for about a year in the mid-1980s. Ten hours of instruction, given by the dealer (John), was included with a new owner’s purchase as part of the sales support. Much of his flight time is dual given during instructional flying, but he has easily spent the same amount of time in a chair on the critique line.

John’s time as the team trainer fielded one persistent topic: how to best pursue a continuing developmental training program. In 1991 and 1993, John was invited along with Pete and Sara Anderson, Patty Wagstaff, and Ellen Dean as part of a U.S. delegation to visit Borki, Russia, and attend the Soviet training programs.

John’s mission on the trip was to associate with Kasum Nazhmudinov and learn as much as possible about the very successful training techniques he had employed for more than 23 years. John was not disappointed. Kasum had been the trainer, coach, and manager for the Soviet aerobatic program since 1969. From 1970 to 1982, Kasum would coach three World Aerobatic Champions from the USSR: Igor Egorov, Victor Letsko, and Victor Smolin.

In his 1991 article about the experience, John wrote, “I found the experience valuable from a team trainer perspective. There are learning situations, which just cannot be accommodated in any other way except by being in the arena; this was one of them.” The training sessions cemented John’s belief that the U.S. required a concentrated training program to develop team dynamics and create a pool of competent aerobatic pilots equipped to perform on the global stage. John feels the same today and advocates a farm system using a camp-style setup like 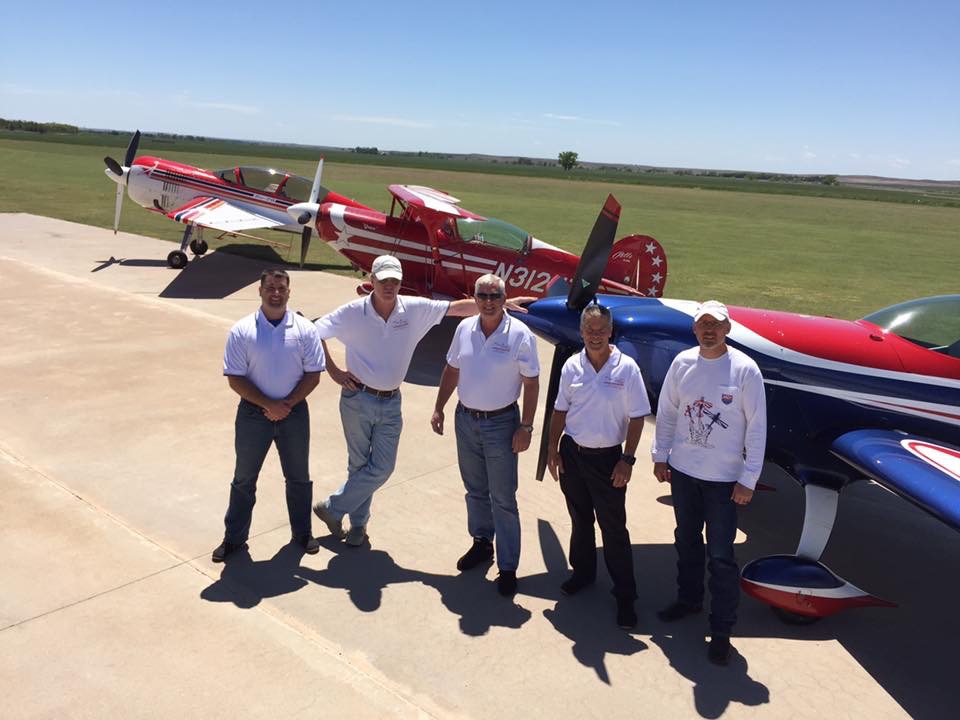 In 1993 John coordinated the first Ashland training camp, named after the host community of Ashland, Kansas. Ashland is home to the late Harold Krier, one of aerobatics’ early pioneers and John’s fellow inductee into the Aerobatics Hall of Fame. Ashland camps started as a single gathering of 10 pilots for 10 days and evolved into multiple smaller seven-day camps that tailor the training to each pilot’s needs.

The structured teaching methods he experienced in the USAF Fighter Weapons School at Nellis Air Force Base would find their way into the structure of his aerobatic training camps. He is quick to point out that his military training was about leading people and training them, not just about war. Aspects of the Ashland training camps find their roots in producing maturing moments for his students.

The camps are based on three distinct experiences: the USAF Fighter Weapons School training, in which the invitation-only class was held for about two to three months with room for a limited amount of students, about five to six, and was organized with a purpose; the Soviet training camp, in which pilots were given short flights three times a day, the coach closely observing the way the judges were scoring the figures and the pilots removed from contests until they were fully prepared for competition; and his own experience within the IAC and how competition was run in the United States.

Ashland graduates have repeatedly demonstrated the success of this program with multiple champions at the U.S. Nationals in all categories, countless regional awards, and students filling positions on the U.S. Aerobatic Teams. There have even been medalists at the World Aerobatic Championships, including IAC President Robert Armstrong, who John coached from 1992 through 1996. More recently, Aaron McCartan was a 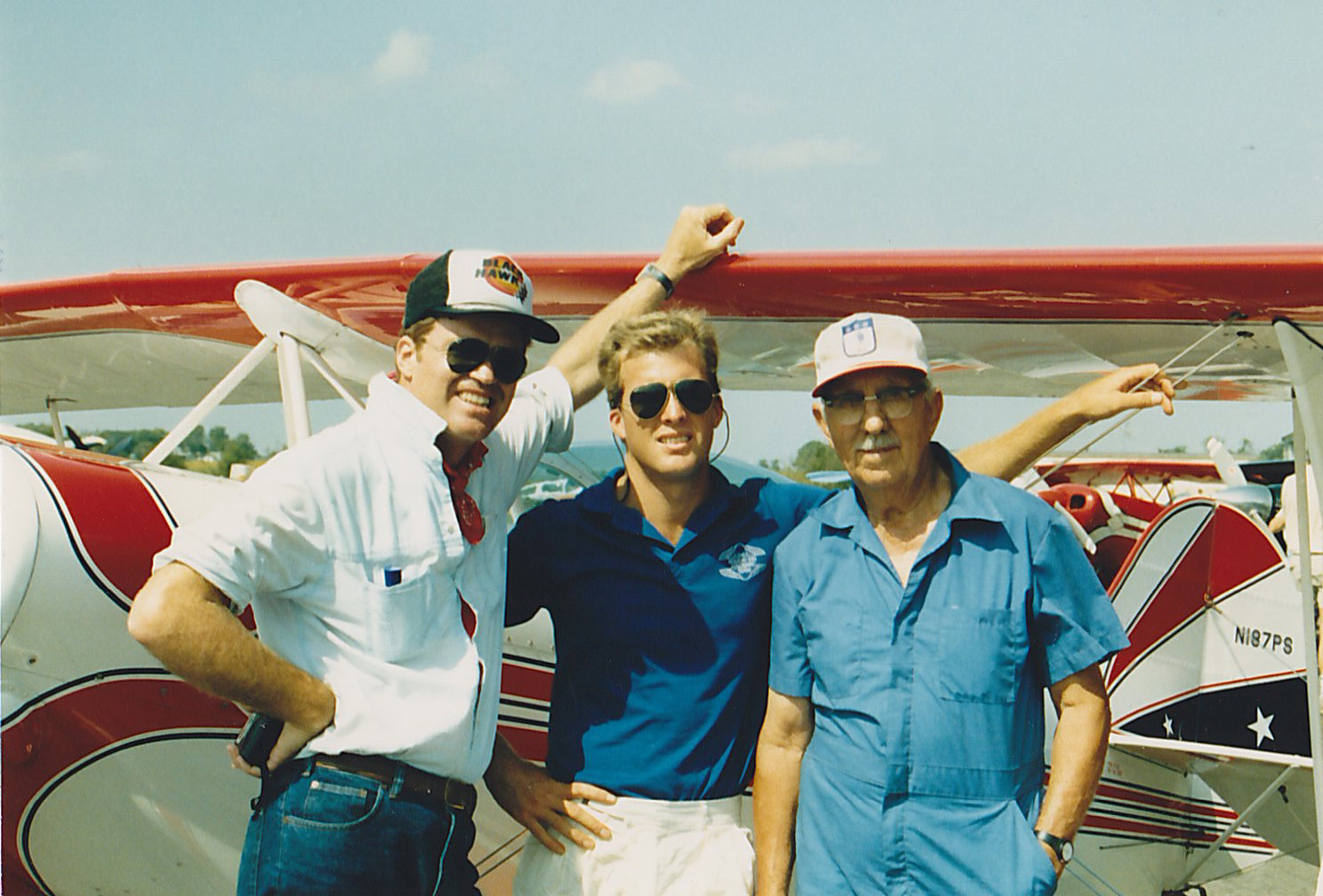 gold medal winner in the second Free Unknown during WAAC 2018.

One hallmark showing of the training program occurred at the 2009 U.S. Nationals in Denison, Texas, where nine attendees of the two camps captured more than 25 percent of the awards for flying achievements and one position on the U.S. Advanced Team.

At the most recent U.S. Nationals, a number of pilots who had trained at the Ashland camp claimed flight medals, and two found their places on the podium. Beth McCartan won gold in the second flight for the Primary category, David Valaer was the Sportsman Nationals champion, Craig Fitzgerald won gold in the Intermediate Unknown, Tom Rhodes was the Intermediate Nationals champion, John Ostmeyer won bronze in the Advanced Freestyle, and Aaron McCartan won silver in the Unlimited Known.

To date there have been fewer than 200 students to go through this program, which speaks to the exclusivity based on repeat development. John will accept referrals from his current students as ones to watch, and if they have potential, he will invite them to camp. He likes to make sure there are one or two new people every season. John and his wife, Linda Meyers-Morrissey, organize the Ashland training camps, which continue annually and are regaled as one of the best-kept secrets of aerobatics.

Worthy of note, John still provides dual aerobatic instruction, along with private critique and coaching sessions, and prepares judges for the line through individual assistance and teaching IAC judging schools. John first certified as a judge in 1975 and headed the certification program for the IAC in 1977 and 1978, when he also commenced chief judging. John’s judging was not restricted to IAC, as he served for Fédération 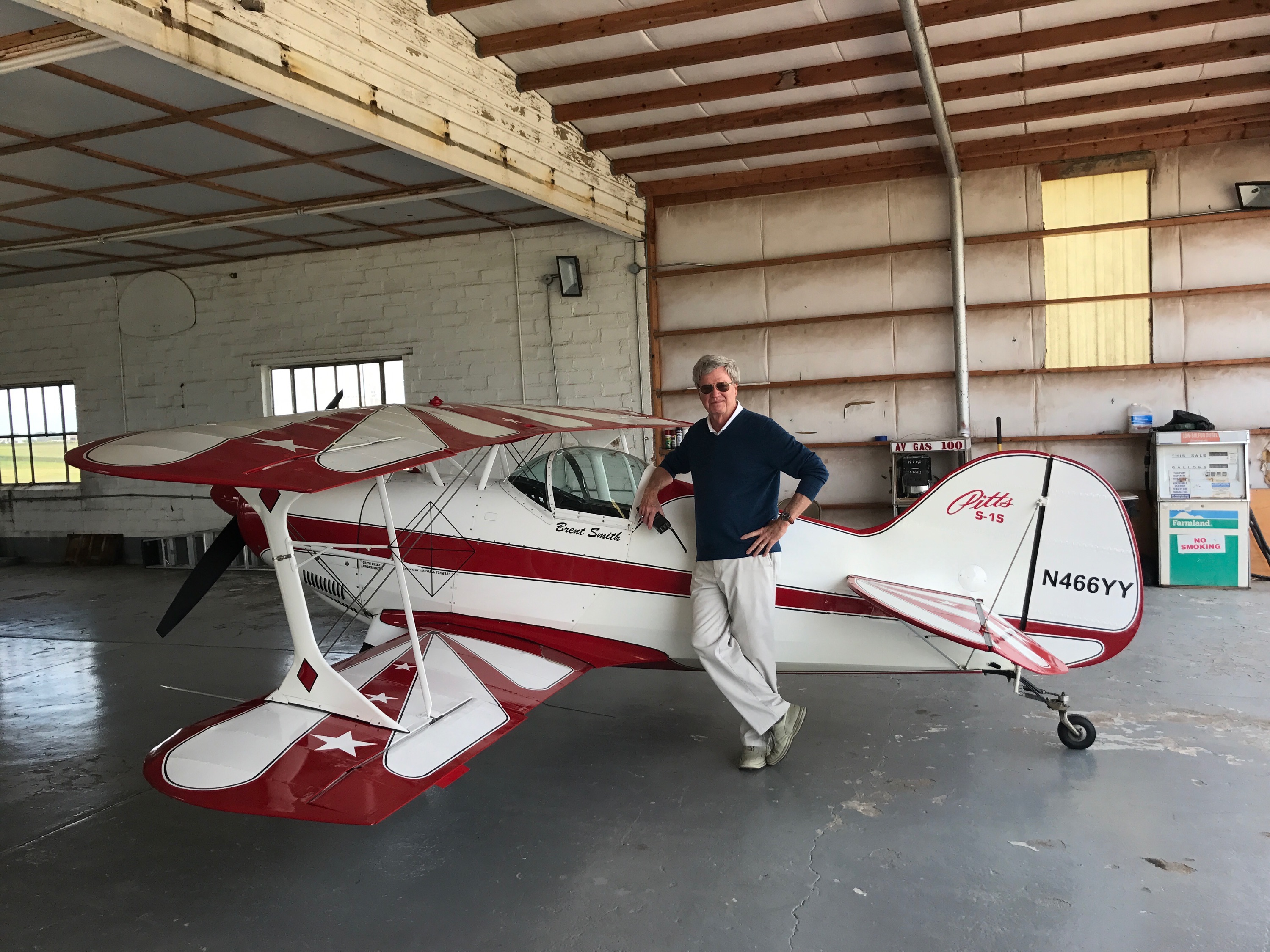 Aéronautique Internationale special events, such as the Breitling World Cup of Aerobatics.

The IAC judging experience ultimately earned John the Robert L. Heuer Award for Judging Excellence in 2013. In 2016, he earned the award named after his mentor, the 2016 Harold E. Neumann Award, presented to the outstanding chief judge of the year.

John is known to mass-email his repeat students with periodic safety briefings when he comes across an incident or mechanical report that is germane to civil aviation, aerobatics, or airmanship in general. Several of the Ashland camp attendees have benefitted from John’s extensive knowledge and keen eye for detail at the technical level. Many have noticed that as John strolls through the hangar, he visually preflights each of the aircraft! Ultimately, John sees his role as the final safety inspector, going to the extent of placing full attention on each student as he or she lands the aircraft to ensure a successful conclusion to the mission. For those who have never looked up Ashland, it is in the middle of nowhere and John is the pilot’s first responder should something go awry. The level of concern for those who study under his tutelage is but a small example of the character of the man we honor as a Hall of Fame inductee.

John’s students soundly believe there is no individual in IAC who has shaped as many aerobatic careers as their coach, mentor, and friend. John cultivates a strong position on safety through education first, then on proficiency through his unwavering discipline toward developmental training.