It can happen to anyone.  Although the final report is still in development as of this writing, data from the “black boxes” recovered from the 2009 crash of Air France flight 447 strongly points to loss of control-inflight (LOC-I) as the cause of this tragic accident.  And, sadly, LOC-I accidents do occur on a much-too-frequent basis, especially in general aviation (GA).  According to a recent Accident Data Set prepared by the General Aviation Joint Steering Committee (GAJSC), Loss of Control-Inflight was the dominant cause of fatal general aviation accidents over the last decade.

When we talk about loss of control, we are referring to accidents resulting from situations in which the pilot should have either maintained or regained control of the aircraft, but did not. Loss of control is divided into two types: Loss of Control-Ground (LOC-G), and Loss of Control-Inflight (LOC-I).

Forty percent of the fatal accidents during the period 2001-2010 were categorized as LOC-I, outpacing the number two fatal accident category, Controlled Flight Into Terrain (CFIT), by a three-to-one margin. LOC-I events were further subdivided into twelve phases of flight. As shown in Figure 1, most fatal LOC-I accidents happened during the maneuvering phase, occurring about 1.4 times as often as accidents during the approach and en route phases, and 26 times more frequently than accidents during both emergency landing phases combined. 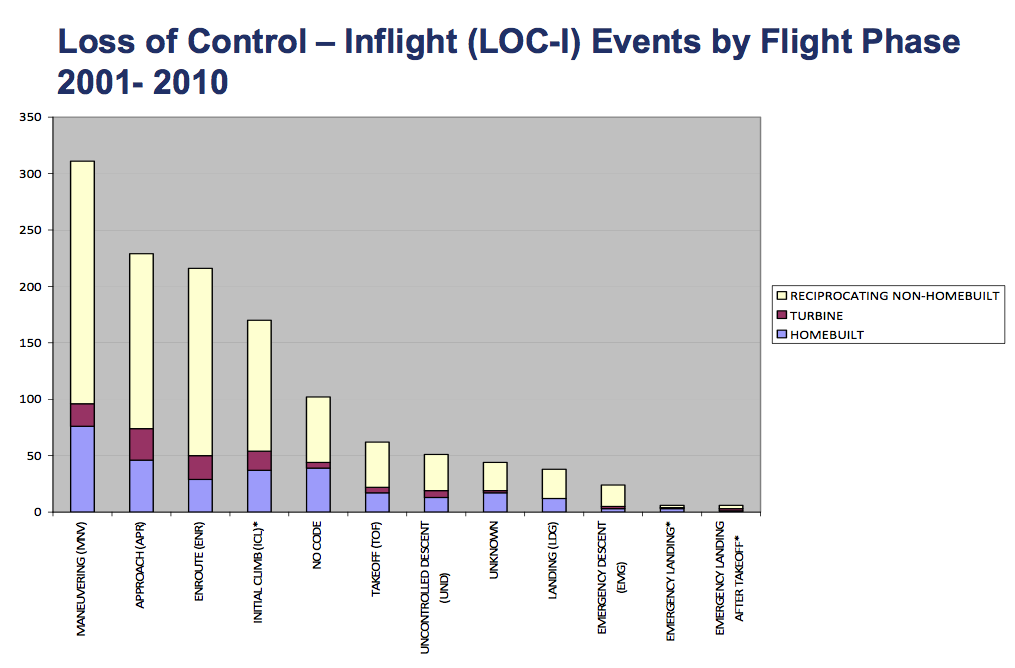 The GAJSC data regarding maneuvering flight in particular are consistent with findings published by the AOPA Air Safety Foundation (now Air Safety Institute) where nearly 27 percent of all fatal accidents occurred during maneuvering flight. Moreover, 41 percent of those fatal accidents ended with a stall/spin. Realize, too, that for each LOC-I accident we can readily analyze, a significantly greater number of related and mostly uncounted incidents and hazards have also transpired. The goal, then, is to reduce not only the number of LOC-I accidents, but also the much larger group of near-accidents.

The obvious takeaway is this: We need to get better at maneuvering our aircraft. And “we” means each and every one of us. LOC-I does not discriminate. LOC-I happens to low-time and high-time pilots, to student pilots and airline transport pilots alike. Many factors can drive an LOC-I event--inadequate preflight, poor decision-making, faulty risk management, inexperience, complacency, distraction, surprise.  But the final act in the accident sequence usually comes down to a misapplication of the controls by the pilot.

We can and should build a multi-layered defense against LOC-I through better training in the mental skills needed to avoid LOC-I in the first place, coupled with better training in the stick-and-rudder skills needed to prevent and recover from LOC-I scenarios. For example, too few pilots consider what they would or could do to fly an aircraft that has jammed controls. Slips and slipping turns are the necessary piloting skills to counteract stuck ailerons, a stuck rudder, and split flaps. The same might apply during an asymmetric thrust event in a twin-engine aircraft as well. Many pilots are also unaware that, in the event the elevator control somehow becomes disconnected, certificated aircraft are required to be controllable through landing by using only trim and power adjustments. Of course, it takes training with a qualified instructor to be able to fly, much less land an aircraft without using its primary pitch control.

Stalls and spins continue to be a significant part of LOC-I. Unlike the wings-level, one-G stalls practiced for check rides, most inadvertent stalls are of the less benign, accelerated variety. Indeed, one study found that turning and/or climbing flight preceded 85 percent of fatal stall-only accidents; in other words, while the pilots were maneuvering. Another study found that 93 percent of accidental spins began at or below traffic pattern altitude. Maneuvering in the traffic pattern especially demands keen stall and spin awareness skills at all times.

During any unexpected or unusual event, it is important (if not cliché) to “fly the airplane” no matter what. This begins by immediately regaining control of the aircraft; or if control has not been lost, by not taking subsequent actions that could cause a loss of control. We can only bring the appropriate flying skills to bear, however, if we maintain control over ourselves first. Our rational brains must override the emotions and natural instincts that are often counterproductive to surviving an inflight emergency. We must be able to work our way through emergency situations by thinking and acting purposefully. This can only be accomplished through repeated and controlled exposure to scenario-based training exercises.

With the airplane under control, avoid becoming absorbed with what is wrong to the exclusion of the bigger picture. Maintain your situational awareness and take inventory of what is going right and what resources are available to you. For example, can you hold altitude? How much fuel remains? Is an airport or suitable off-airport landing site nearby? Whom can you enlist to help: passengers, ATC? And don’t let the natural urge to get the aircraft back on the ground ASAP drive subsequent actions. Unless fire is involved, taking a few deep breaths and some time to think can bring greater clarity to an otherwise tense situation and just might reveal better options as you formulate a plan.

To reduce the threat of LOC-I resulting from mishandling the controls:

Note, however, that even though this training typically involves the use of aircraft approved for aerobatic flight; it is not traditional aerobatic training. It’s one thing to learn how to perform intentional loops, rolls and other maneuvers with precision, but quite another to develop an awareness of situations that can lead to LOC-I and to learn the altogether different skills needed to recover from unexpected departures from controlled flight. Equally important, quality unusual attitude training creates a unique environment in which to learn how to override the potentially debilitating mental inertia that accompanies the normal shock of an unexpected loss of control.

Common loss of control training scenarios include stalls and spins, especially as they relate to maneuvering flight. For instance, consider scenarios such as the skidding base to final turn or the mishandled turn-back to the runway following an engine failure soon after takeoff. Other training scenarios may include wake turbulence and other environmentally induced rolling upsets, spirals under the hood, and alternative ways of controlling an aircraft should any of the primary or secondary controls become inoperative.

Rich Stowell is an internationally-recognized authority on loss of control prevention and recovery. A seven-time Master Instructor and charter member of the Society of Aviation and Flight Educators (SAFE), Stowell has been providing unusual attitude training for twenty-five years, including performing more than 32,400 spins. He is also the 2006 National Flight Instructor of the Year.