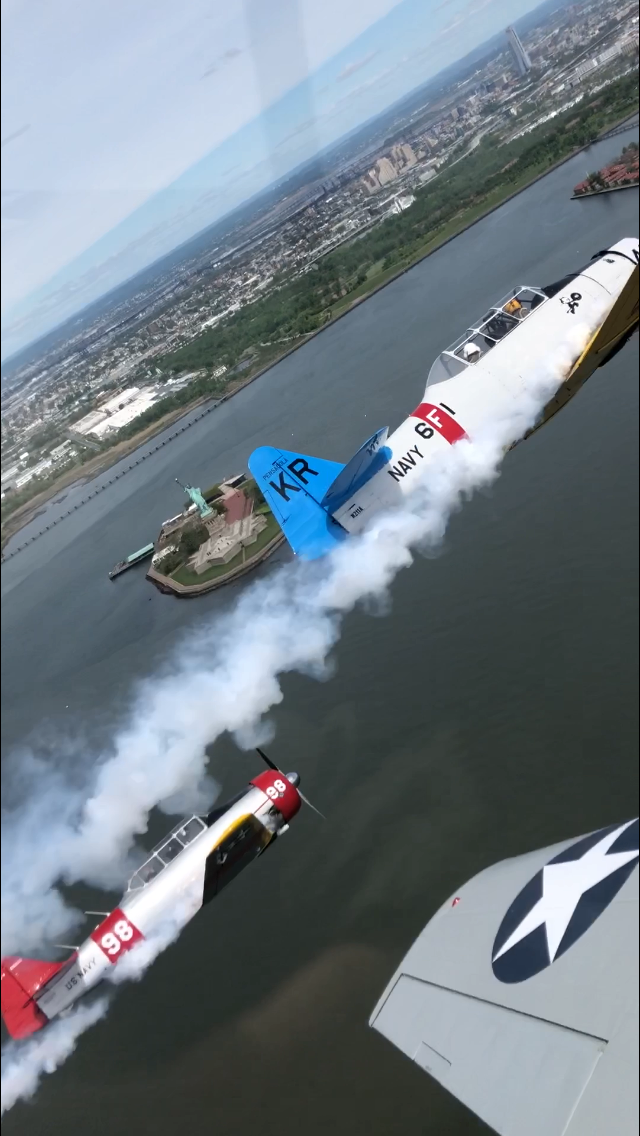 Aerobatic IAC member Pilot Kevin Russo flies Tribute to Veterans of VE-Day and WWII and current and past Veterans as well as Health Care works while airshows are in stand down mode.

A Member of the International Aerobatic Club Kevin J. Russo IAC#437431 had the opportunity to fly a special formation flight in Honor of VE-Day and Medical Workers in the NJ and NY area. The flight was conducted on 16 May 2020.   Kevin leads the flight of the four T-6's.  He can usually be found flying aerobatics at an airshow in the North East, however since airshows for the most part have been canceled, he and his fellow team members did some very special fly overs.  Number 2 in the tribute flight was Gavin Nagle with Ed Nagle in the back seat. Serving as the photo aircraft was Number 3 piloted by John Mazure. The photo in this article was taken by his wife Nadia. Slot number 4 was Dr Buzz Cortese (just out of the photo shot).

A group of World War II T6 Texans known as the "Jersey Jerks" did the flight in Honor of VE-Day (Victory in Europe) and to all the veterans and all the Medical workers and First responders for all their dedication during this Covid-19 Crises. The formation team is called the Jersey Jerks in Honor of Maj Donald J. Strait who was a fighter pilot in WWII serving in the European Theater flying the P-47 and P51 Mustangs and was credited with 13.5 aerial victories. He’s home state was NJ and he paid homage by calling his plane “Jersey Jerk”.

Kevin Russo is a former USAF Lt. Col., who saw combat from Desert Storm through Operation Iraq Freedom, has lived in Branchburg for the past 28 years. His plane is located at Somerset airport the other aircraft pictured is owned by Ed Nagle who lives in Readington and is based at Solberg. The other two aircraft in the formation are owned by New Jersey natives, Dr. Buzz Cortes whose aircraft is just out of the picture and John Mazure whose aircraft was the photo plane and are also based in New Jersey.

Passes were made by a number of installations celebrating the brave men and women both in the medical fields as well as present and past military members. “It was an honor that we could do this for all of these folks.  They have all risked their lives and some have given the ultimate sacrifice to help all of us. This tribute was for them,” said Kevin.

Jersey Jerks fly at airshows that are held in the North East from May-October each year.  Kevinrussoairshows.com