CIVA President Nick Buckenham announced that the 2020 World Advanced Aerobatic Championships will be postponed until 2021. Originally scheduled to be held in August in the Czech Republic, the coronavirus pandemic has caused the cancellation or postponement of most FAI air sports events this year including aerobatic championships.

The U.S. Advanced Aerobatic Team was making plans for training camps and practice and participation in the WAAC up until the pandemic broke out throughout the world. However, all eight team pilots have committed to competing in the 2021 championships and the 2020 team will remain the same and intact for next year. Though there is deep disappointment in the postponement of this year’s event, they look forward to flying for medals and trophies next year. The 2021 WAAC will most likely be held in the Czech Republic and additional details will be provided by the organizers in the near future.

CIVA's announcement today included their thoughts on future events that were already scheduled for 2021 and 2022. Discussions are underway to move all of these events forward by one year to 2022 and 2023. Nick stated that over all it is a difficult matter to resolve, but when they have secured final agreements for these events they will post information to their website and circulate to all interested parties.

A separate announcement regarding team selection at this year's U.S. National Aerobatic Championships will be made by the IAC board of directors. 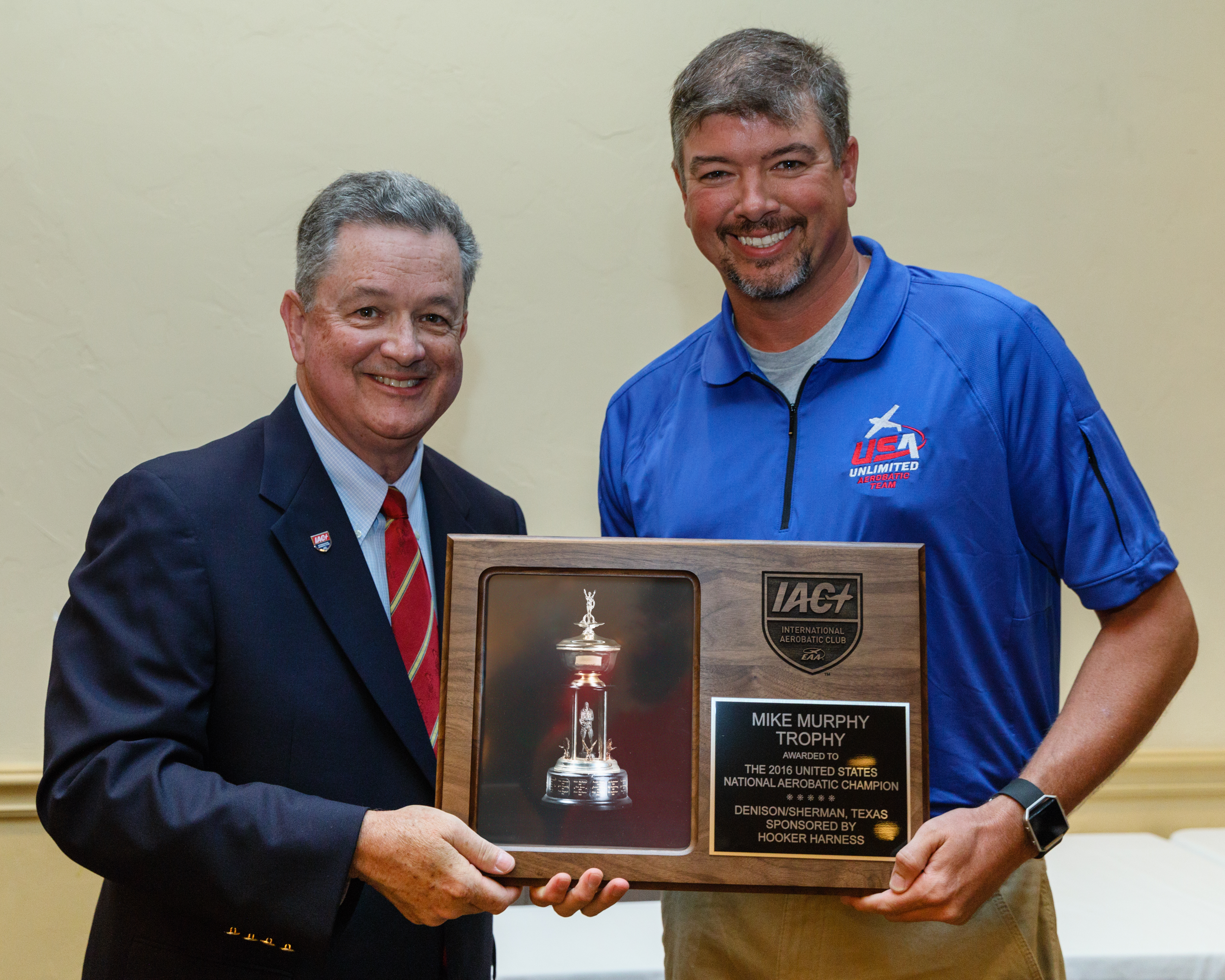 In mid-December, U.S. Advanced Aerobatic Team Captain, Jeff Petrocelli contacted Mike Heuer to let him know of the team pilots’ nomination for him to serve as the team’s manager. Although he had the team manager position on his “bucket list” of things to do in aerobatics, he was pleased and surprised to get the call.

Mike brings considerable FAI and CIVA experience to the table, which our teams strongly need to be successful. They require an experienced advocate on the championships site who knows the rules as well as all the personnel involved. Mike has worked with all of the WAAC contest officials in the past and believes he can be very effective while in the Czech Republic. The championships will be held in Hosín (LKHS) on August 6-15, 2020.

From 1986 to 2012, Mike served as the President of the FAI Aerobatics Commission (CIVA) and as a Vice President of Fédération Aéronautique Internationale. He served as U.S. Delegate to CIVA from 1984 to 2018. Well versed as a president and member of international juries at 27 World Aerobatic Championships, World Advanced Championships, and FAI special events from 1986 through 2014, Mike has a firm grasp on the rules and all the organizational details that go into a world championship.

Mike’s goal as team manager will be to relieve as much of the workload and stress on the pilots as possible as they must be free to focus on training and competing. This is key to our teams winning the Gold in future championships, a goal he knows everyone shares and to bring credit to the United States and IAC.

Mike will be working closely with team captain Jeff Petrocelli, who will speak for the pilots in planning for the championships, and Rob Holland who has been selected by the team to be their team coach. Rob brings many years of training and competition experience to the team as nine-time U.S. National Aerobatic Champion and a pilot on several teams. Training camps are planned this coming Spring in Union City, Tennessee prior to the team’s departure for Europe in late July.

The IAC Board of Directors has endorsed the Advanced Team’s choice of Mike Heuer as their team manager and fully support his efforts as team manager.

At the 2019 CIVA Plenary Conference the site of the 14th FAI World Advanced Aerobatic Championships was named. The championships will take place in Hosín (LKHS), in the Bohemian region the the Czech Republic. Practice days will be from the first through the fifth of August. Contest days will begin on the sixth of August and end on the fifteenth.

The event will stage out of the Aeroclub Czech Republic. Hosín airport began in the first half of the 1950's. In a relatively short period of time, an aviation area was established, which became the largest in the South Bohemian region. In 1952, an aeroclub hangar was established and in July 1953 the sail plane operation was started. The airport has an annual international glider camp and regular skydiving operations. In 1982, the skydiving contingent, Paraklub Aeroclub České Budějovice, of the aeroclub set a world record for a group night jump from 2000 m. 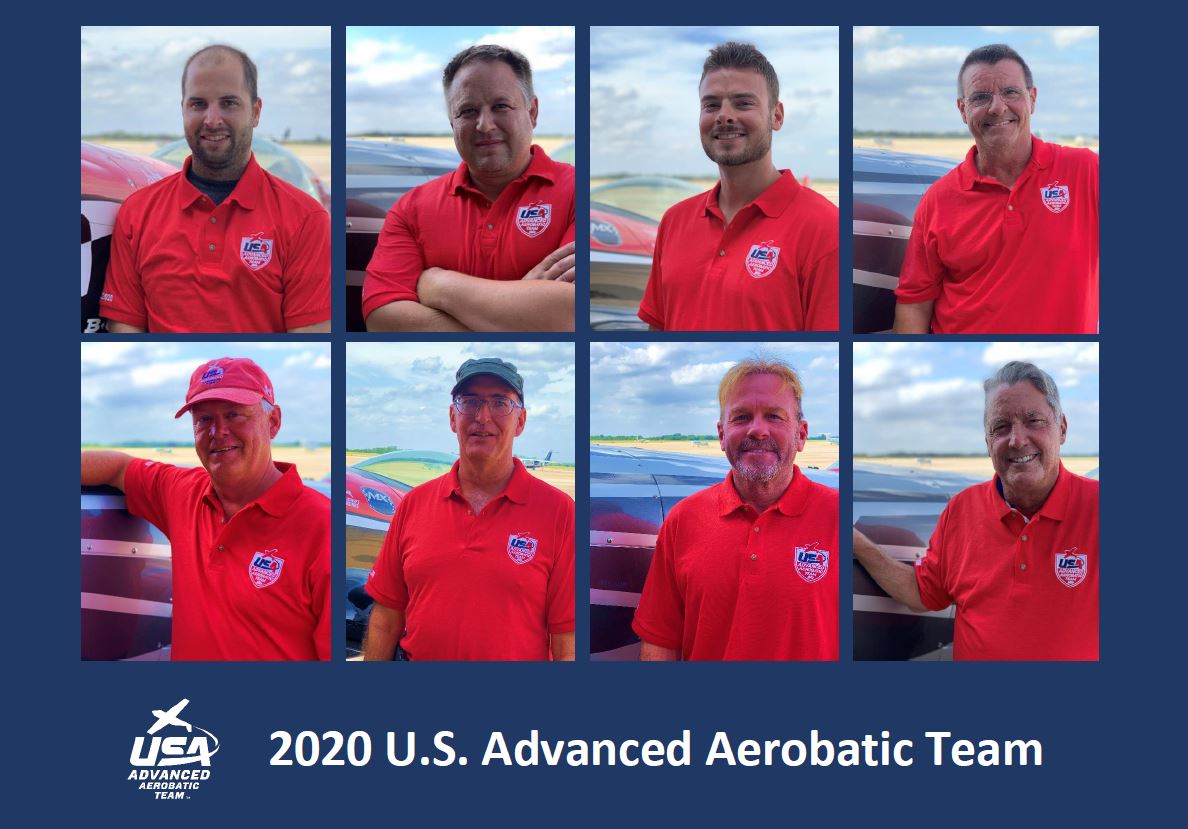 Team members will  compete at the 14th World Advanced Aerobatic Championship. Site to be announced.

The WAAC is complete. The USA has done very well. Individual medals were received in all Unknowns with Aaron McCarton taking Gold in Unknown 2, and Matt Dunfee taking Bronze in Unknown 1 and 3. Overall, two members finished in the top 10 and as a Team they received the Silver! 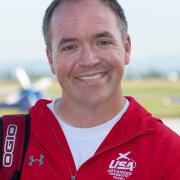 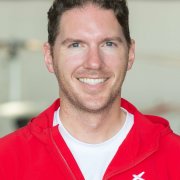 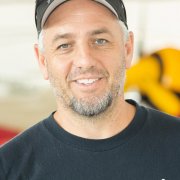 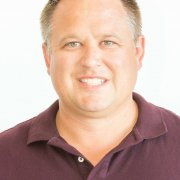 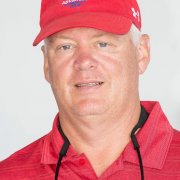 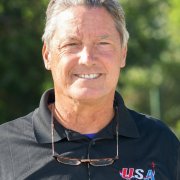 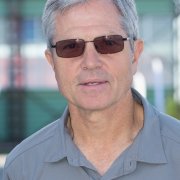 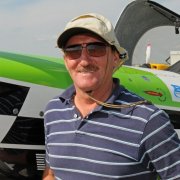 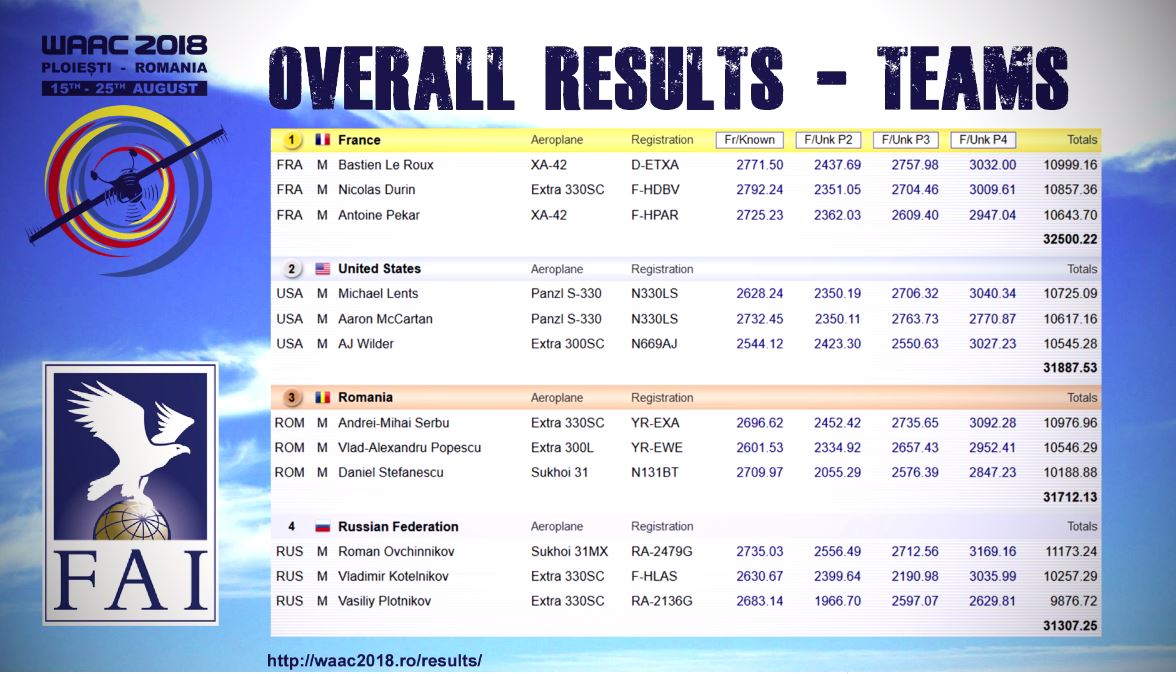 August 22 - US Advanced Team is doing very well at the WAAC in Romania right now, along with 50 other pilots from a total of 18 countries. The championship as now completed 3 of the 4 programmes with only the Free Unknown 3 remaining. Less than 2% separates the French Team at the top over the US Advanced Team. Congratulations to Aaron McCartan on his first place finish in Programme 3 - Free Unknown 2! 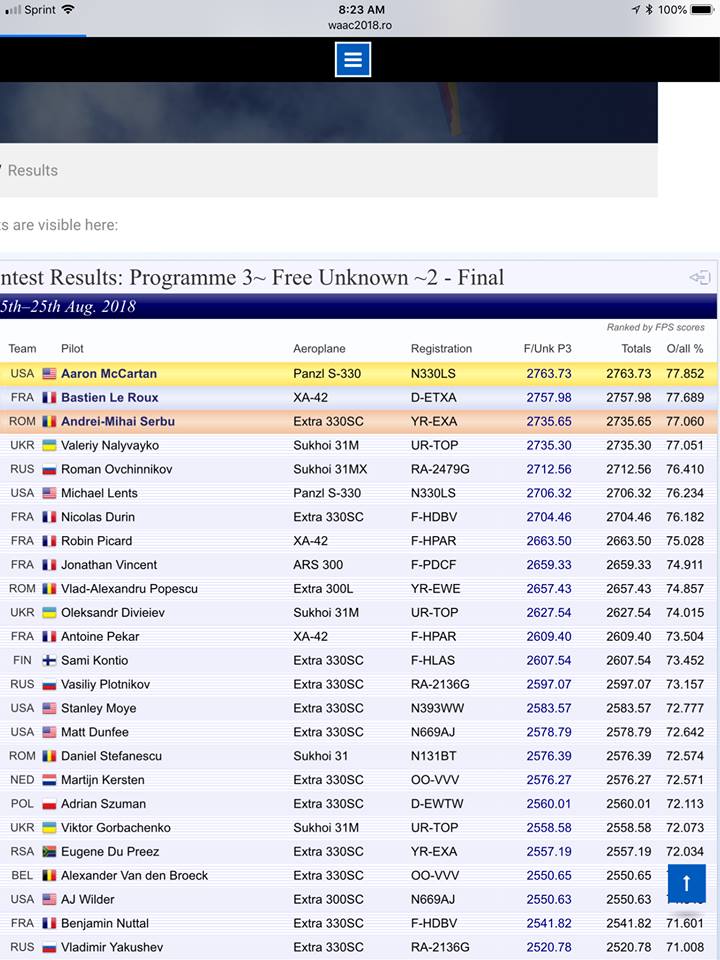 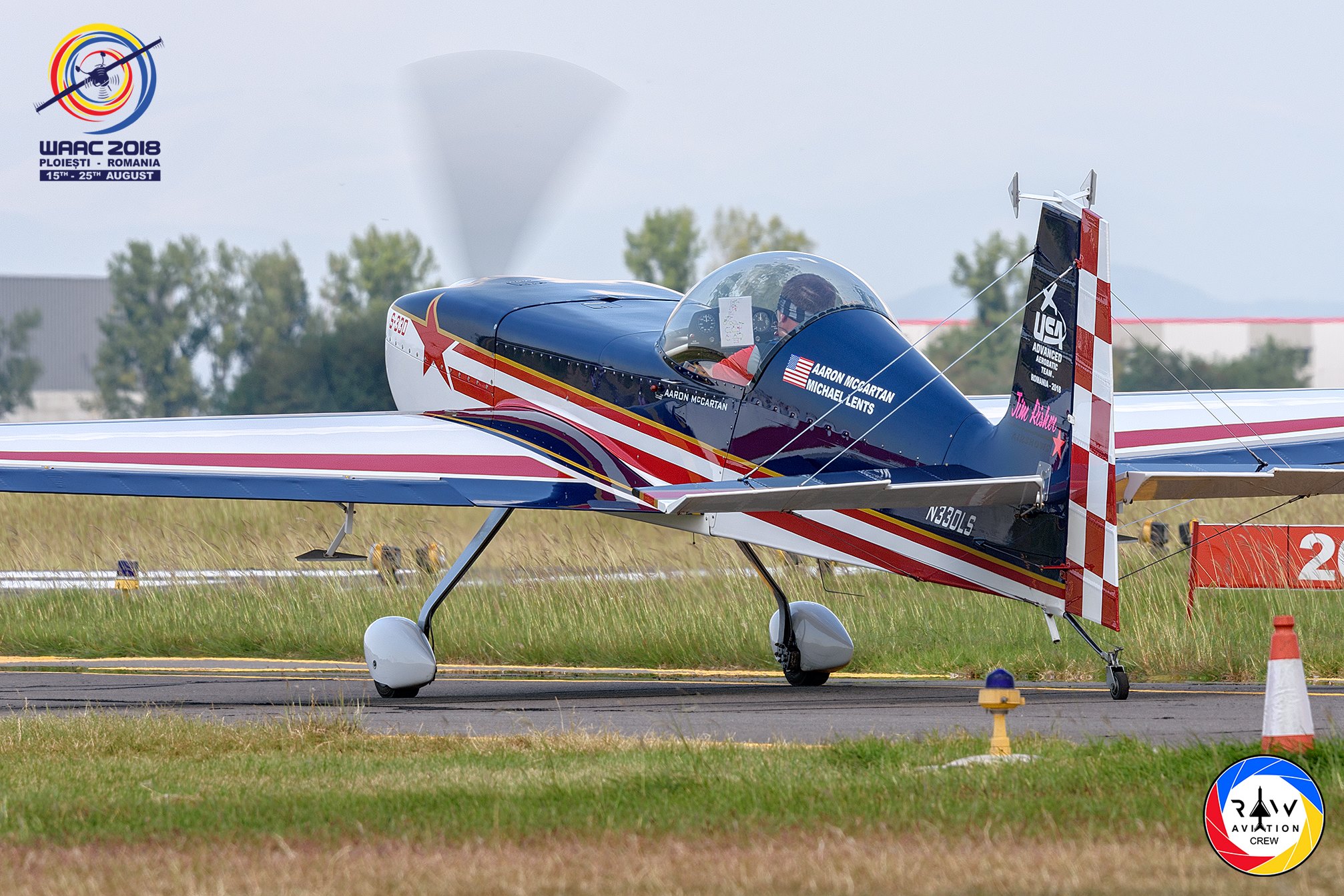 As usual the full results are at http://www.civa-results.com/2018/WAAC_18/indexpage.htm and there's a great facebook page for the event at https://www.facebook.com/WAAC2018/ that should bring you right up to date.

August 20, 2018 - At the World Advanced Aerobatic Championships underway in Romania, so far the Free Known and Free Unknown #1 have been completed and results are final. The good news -- the USA brought home its first medal with Matt Dunfee's outstanding performance in the Free Unknown. Matt came in third place flying an Extra 330SC N669AJ. Congratulations, team and Matt! Results can be found at www.civa-results.com. 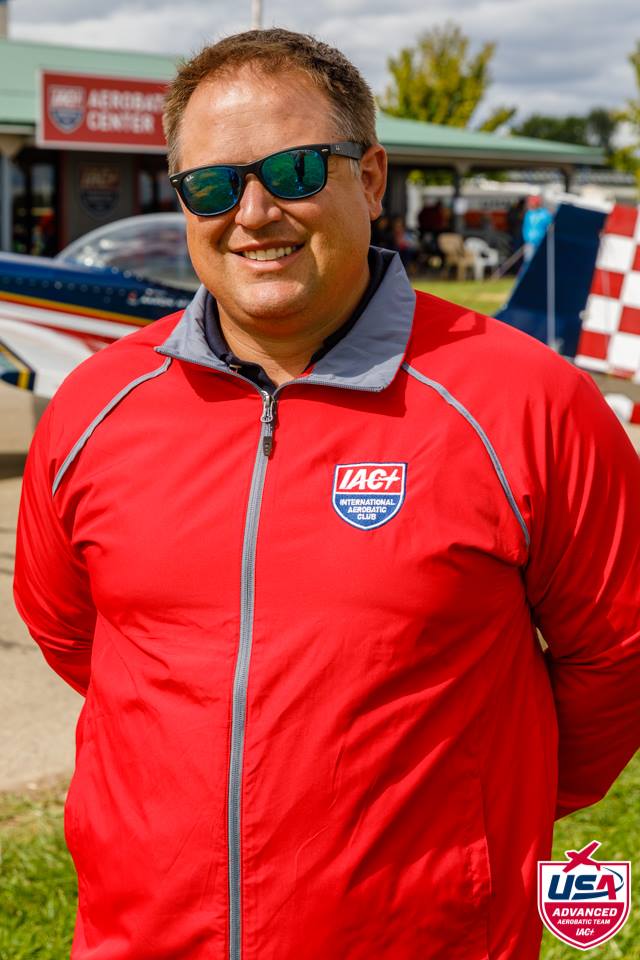 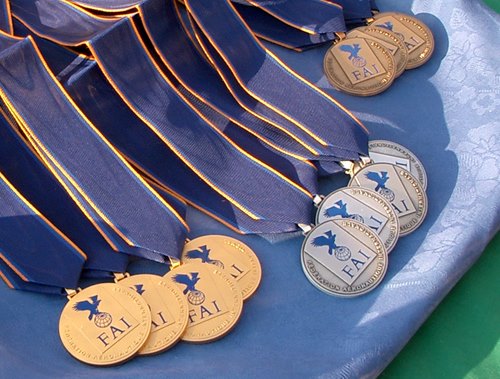 August 19, 2018 - It’s been hectic but we are in flying day #4 of the contest. Still working on Program 2, the First Unknown. Yesterday we had a small weather event which ceased flying and had only allowed the first 19 pilots to fly the Unknown.

Once the weather rolled in, many congregated at the Briefing building and we held an International Foosball Championship event. Fair warning - Husam (UAE) is intense. While playing both French and Romanians, he managed to move the table several feet during the match! Now to get ESPN to recognize this event...

Last night was a planned special event where we eat, drink and dance as Romanians! The organizers brought in a dance troupe and vocalist that presented traditional cultural dances. They then pulled several people from audience to join (including yours truly). 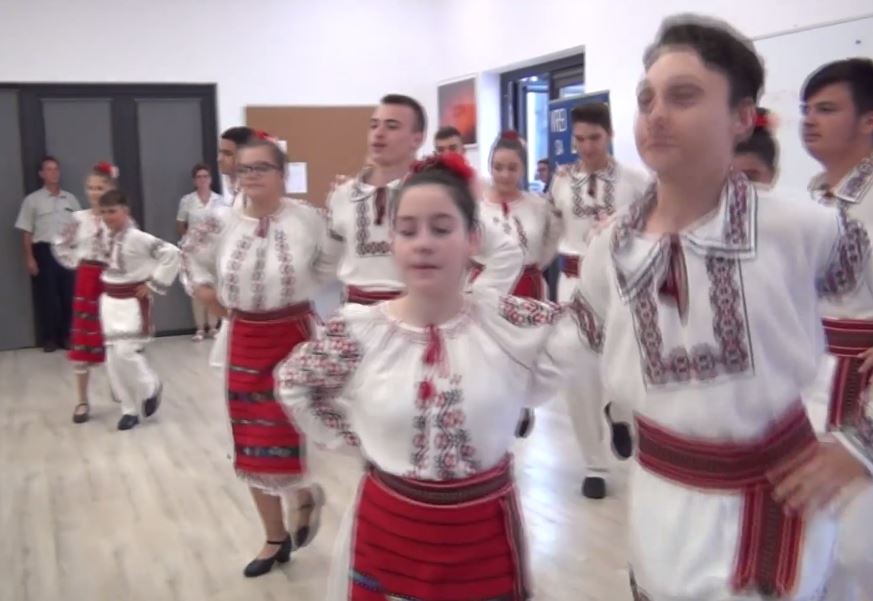 Something oddly fun about making a fool out of yourself on a dance floor with around a hundred of your new friends! It was a truly enchanting experience!

Anyways, as I write this, Michael and Matt have yet to fly. They are up shortly. Please feel free to follow the results at: www.civa-results.com under the 13th WAAC (third link from top of page. With flights so far, USA has collectively moved up in the Team overall. We just keep the momentum going! 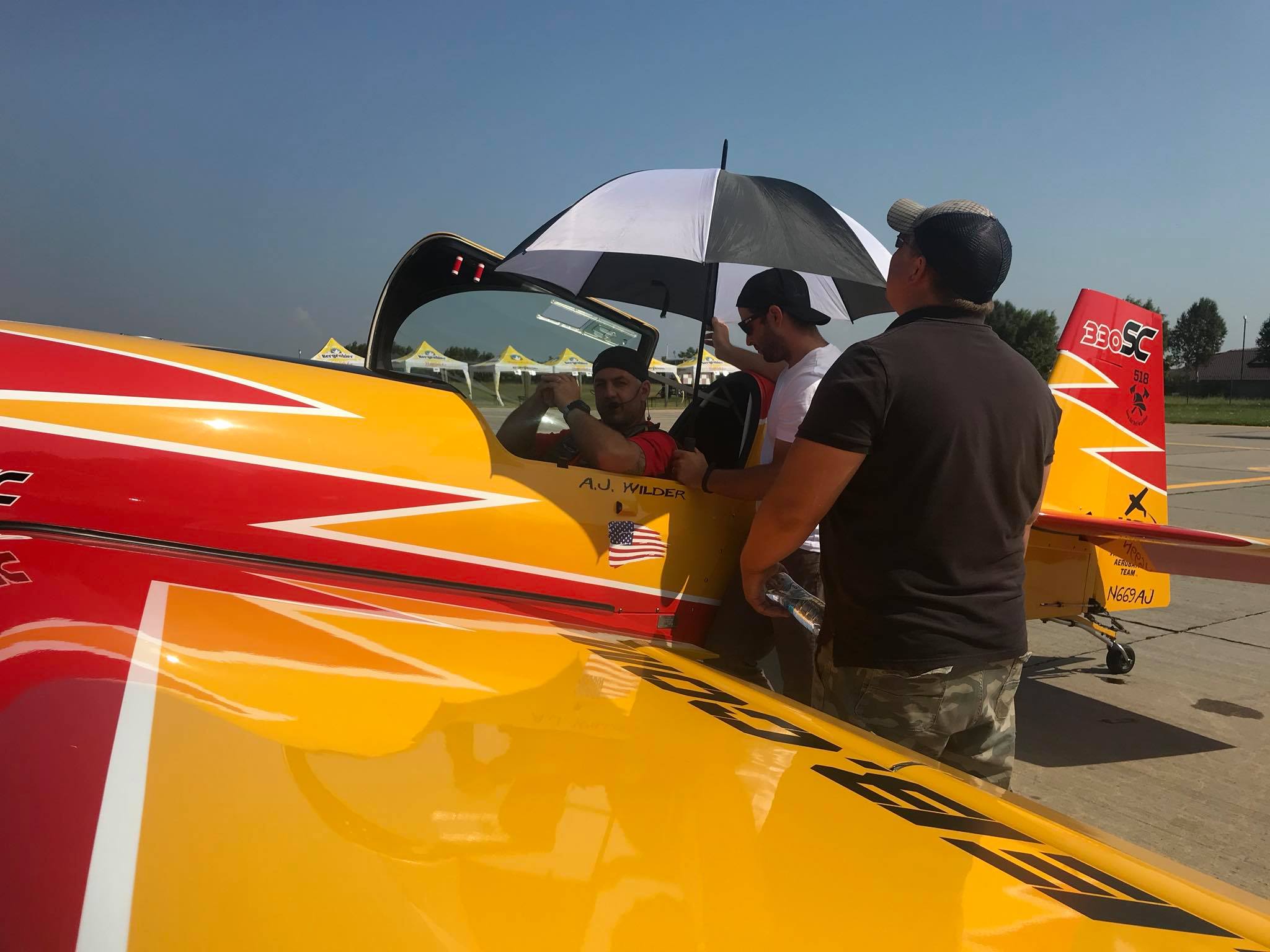 Realistically in Day 1 we may get between 25-30 pilots flown. Hopefully we hit our stride and move a bit quicker on Day 2 and moving forward. The goal is four per hour once in we ‘find our cadence’. 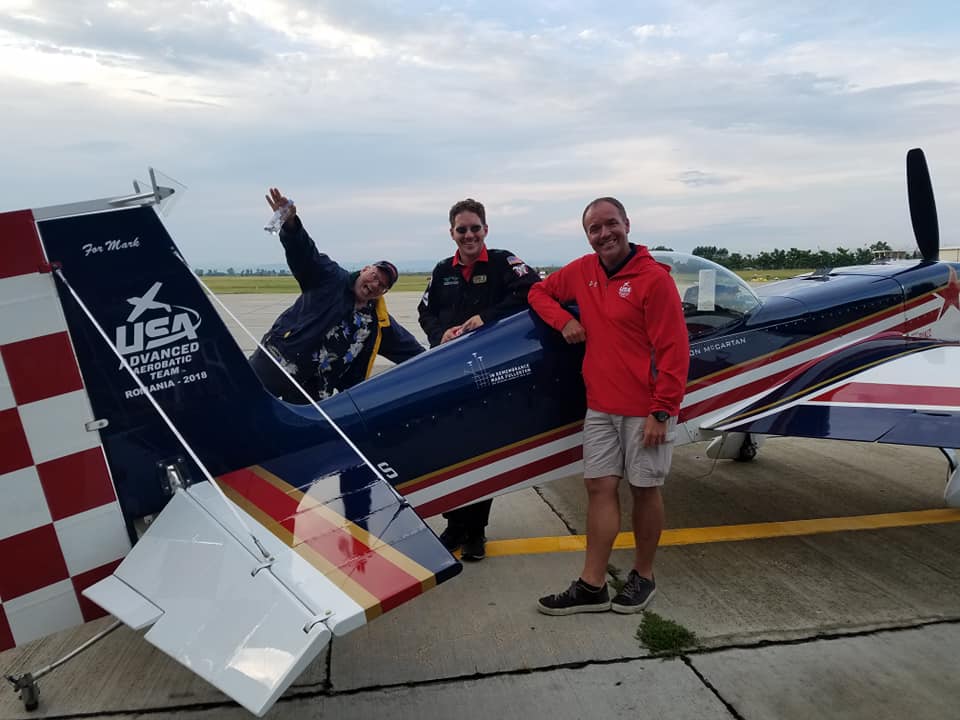 Now we play the waiting game!

Off to Training Camp 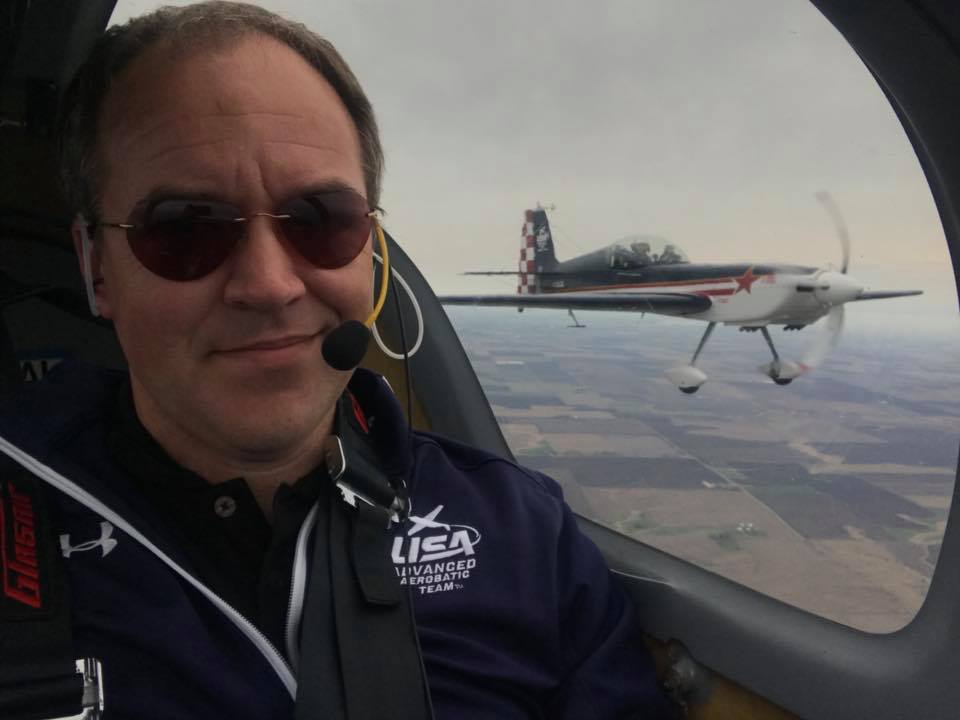 April 2018 - The International Aerobatic Club chooses a U.S. Advanced team in odd years and a U.S. Unlimited team in even years during the U.S. Nationals Aerobatic Championships. This year’s U.S. Advanced Team was chosen at the the 2017 Nationals, held in Oshkosh and has been training for the World Advanced Aerobatic Championship to be held in Ploiesti Romania, August 15-25th, 2018. As part of their training they recently attended the IAC Sanctioned contest, the Snowbird Classic, in Dunnellon, Florida, where team members all placed in the top spots. Team Manager, Mark Fullerton of Georgia, Team members A.J. Wilder of California and John Wacker of Alabama, took the top three places out of a field of 11 competitors. The team will be participating in the upcoming Bear Creek Bash to be held in Rome, Georgia,  June  8-9, 2018. 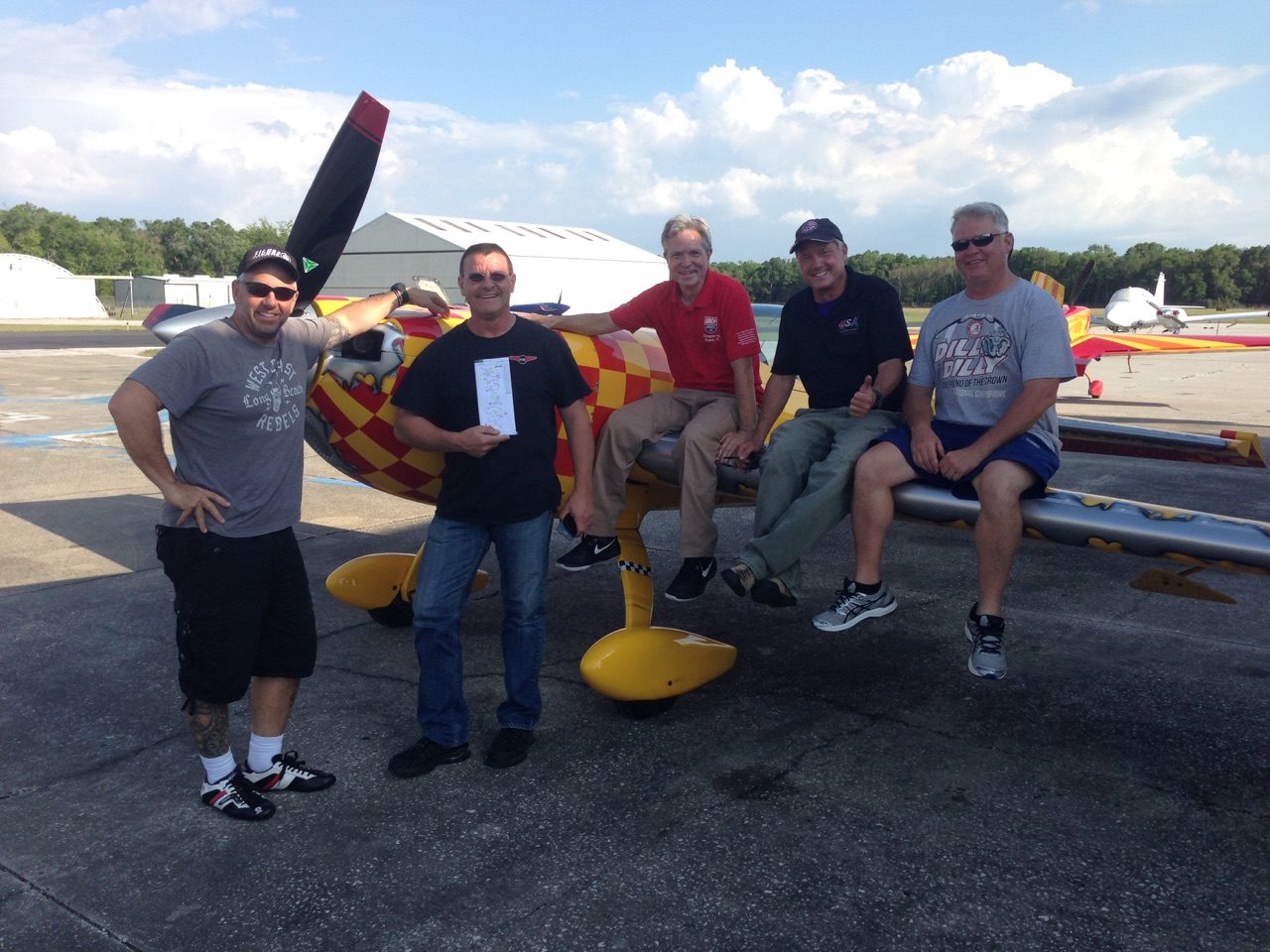 The Advanced Team has set a training schedule to get them ready in the quest for gold. Alternating between Dunnellon, Florida and Santa Paula, CA, as of March 5th the team had experience 4 training camps in Florida and two in California. 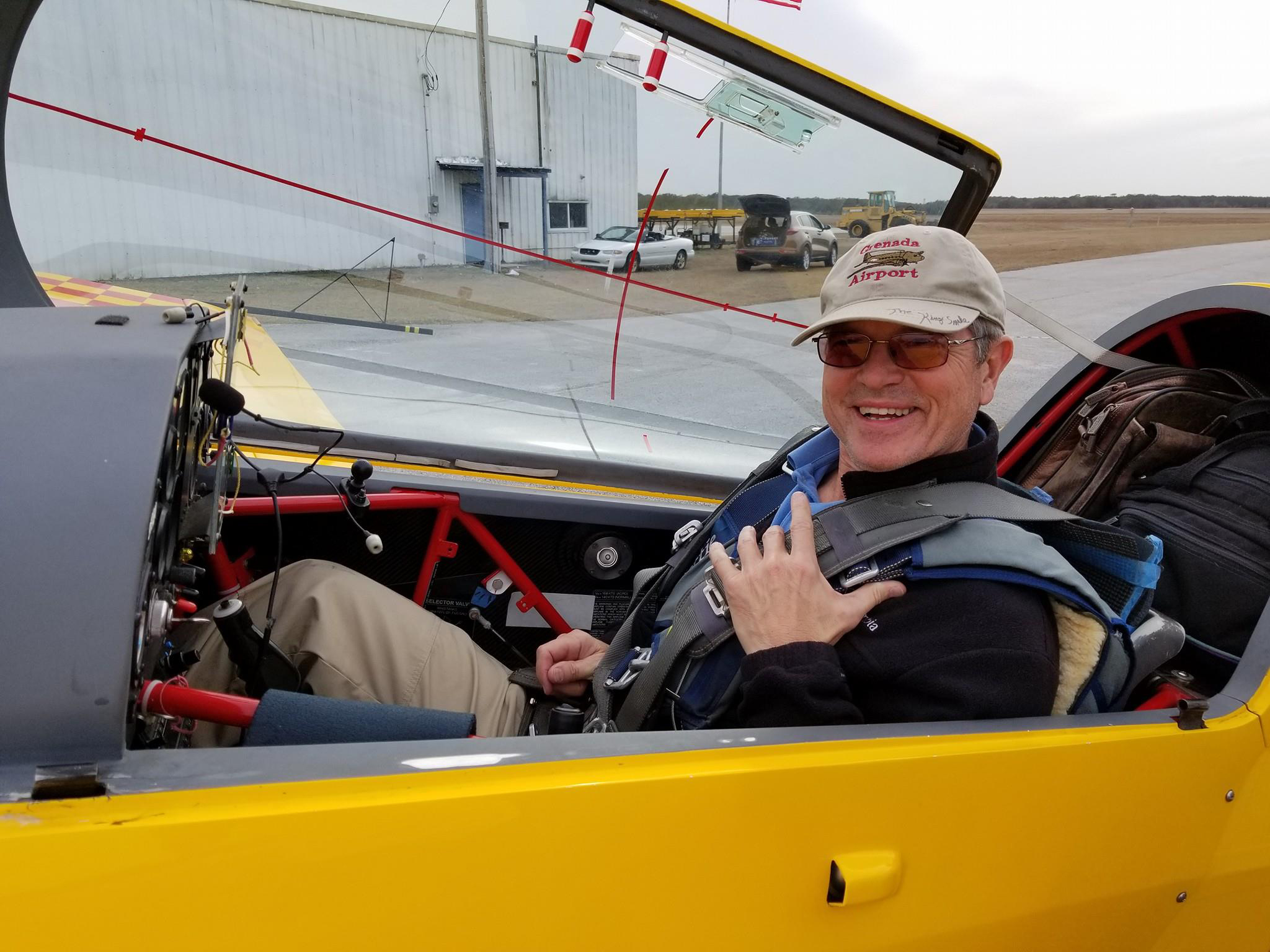 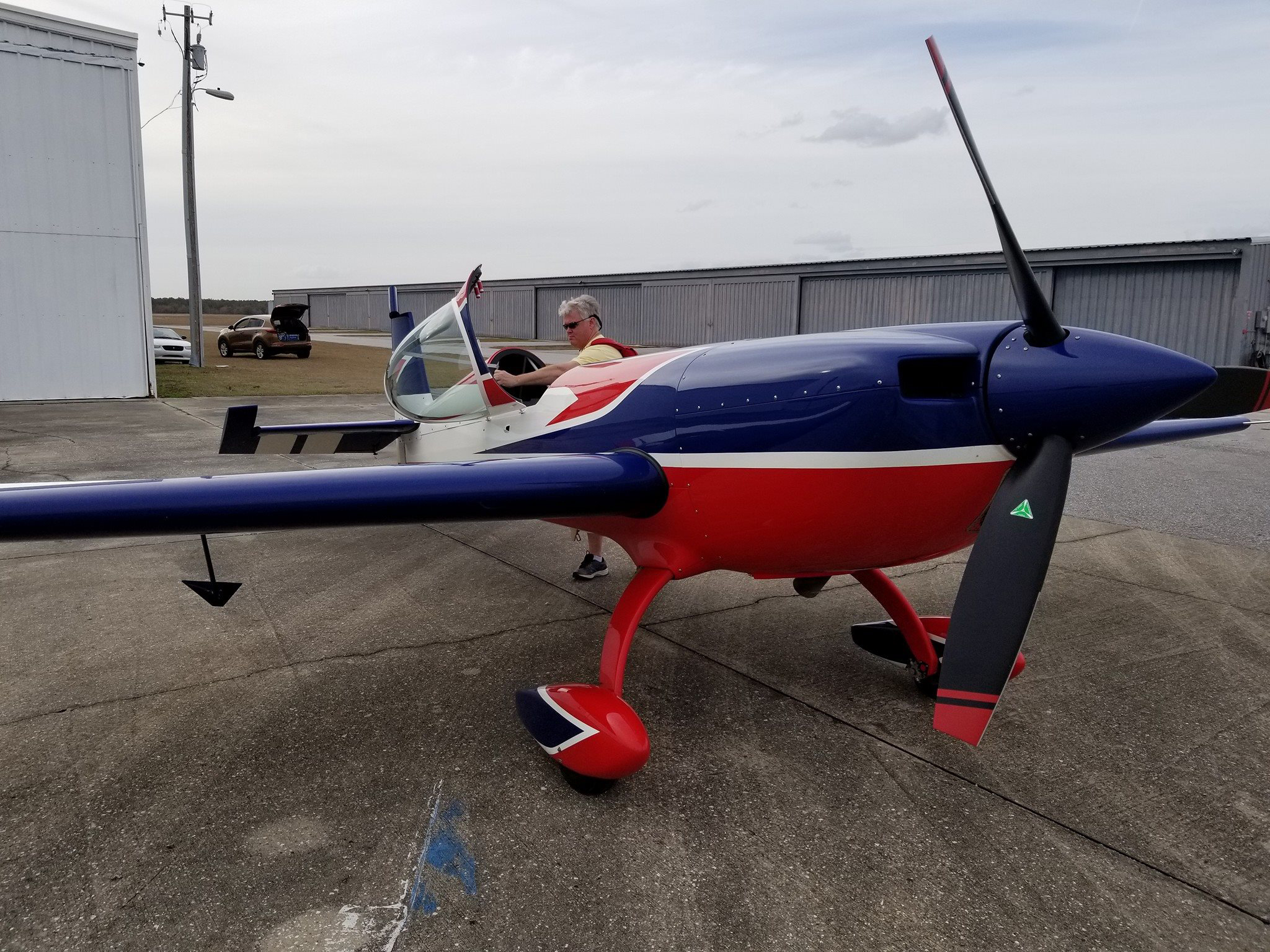 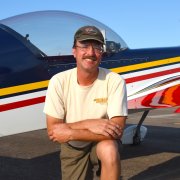 Mark Fullerton of Calhoun, Georgia has been selected by the U.S. Advanced Aerobatic Team pilots to serve as their team manager as they prepare for and participate in the 13th FAI World Advanced Aerobatic Championships. The competition will be held at Strejnic Airfield (LRPW) in Ploiesti, Romania. Dates for the championships are 16-26 August 2018.
Mark brings a wide variety of skills and experience to the task. An accomplished Advanced category pilot, he has flown in 33 contests in the last ten years and most recently in a Panzl S-330 N330PG. He flew as a team pilot at the WAAC in 2014 in Slovakia and in 2016 in Poland. He qualified as an alternate pilot to the team at the U.S. National Aerobatic Championships in Oshkosh, Wisconsin in September 2017. His full-time job is in the textile industry which requires international travel on a monthly basis. He is skilled in international shipping as well which is crucial to the team bringing their aircraft to Europe in containers.
First entering Sportsman category in 2008 in a Citabria, he moved up to through the categories in recent years subsequently flying a Laser 230 and finally the Panzl. His eventual goal is to move up to Unlimited in the Panzl.
Mark is also past President of IAC Chapter 3 in the Atlanta area and current President of EAA Chapter 709 in Rome, Georgia.
Congratulations and thanks to Mark for taking on this task. His appointment as team manager will be formally approved at the IAC Board of Directors meeting in Oshkosh, Wisconsin on 17 March 2018. 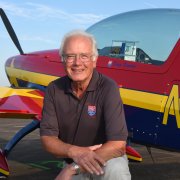 The FAI Aerobatics Commission (CIVA) has just announced the panel of judges for all of the FAI Aerobatic Championships to be held in 2018. Former IAC President Doug Sowder (IAC #14590) of Spokane, Washington has been appointed to serve as a judge for the FAI World Advanced Aerobatic Championships to be held in Romania in August 2018.
In addition to being an accomplished judge, who is typically found to be judging at regional contests across the country in addition to the Unlimited category at U.S. Nationals, Doug is one of IAC’s most active competition pilots. He has flown in Advanced category at 50 contests since 2006. In recent years, his aircraft has been an Extra 300L N25AP.
In addition to IAC contests, Doug was also a U.S. team pilot at the 2004 and 2010 FAI World Championships in Sweden and Poland flying a Pitts S-2B and Extra 300L, respectively. He has served in other contest positions as well including the wind measuring official at the 2013 FAI World Aerobatic Championships in Denison, Texas. He is truly a man of many talents and skills.
He will join 8 other FAI international judges on the line who will be supervised by Chief Judge John Gaillard of South Africa. The USA will be sending a full 8 pilot team to Romania and updates will be posted here as preparation and the competition begin and are underway.